Siniora is back after talks with Hariri over cabinet 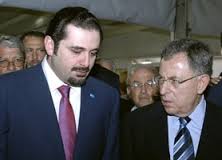 The talks between the two former PMs were to focus on the latest developments regarding the cabinet formation process, according to An Nahar newspaper

Siniora accused on Monday the Free Patriotic Movement ( FPM) of obstructing the formation of the government with the help of Hezbollah, stressing that the two sides backed down on their commitments.

“Everyone showed willingness to facilitate the formation of the government, but now we discover that some sides are obstructing the process by imposing new conditions,” Siniora said in remarks published by the Kuwaiti newspaper Al-Anbaa on Monday.

“ Some have reneged on the idea of the rotation of portfolios, and have adopted the strange thinking that some portfolios are strictly the property of certain individuals, political factions, or confessional groups.”

“These ideas violate our constitution ,” he stressed

Siniora also stressed that those who reject the concept of rotating portfolios torpedoed former PM Saad Hariri’s initiative to share power with Hezbollah in an attempt to end a ten-month political deadlock.

Siniora further criticized FPM leader MP Michel Aoun, saying that he was personally responsible for undermining the cabinet efforts and was being pushed by Hezbollah.

Lebanon’s PM Designate Tammam Salam has been attempting for nearly 10 months to form a new government that would bring together the rival March 14 and March 8 alliances .

Former PM Hariri, whose party has the largest parliamentary bloc in the cabinet and who is considered a pillar in the pro-Western March 14 coalition, stated nearly 3 weeks ago that he is putting aside his personal differences with Hezbollah in an effort to form a national-partnership cabinet that can safeguard the country.

Aoun has rejected the proposed rotation of the ministerial portfolios and his son-in-law Gebran Bassil has voiced his desire to maintain control over the Energy and Telecom Ministries.

Progressive Socialist Party leader MP Walid Jumblatt is reportedly still exerting efforts to facilitate the formation of a new cabinet and end the political deadlock despite the ongoing disputes among the rival parties over the distribution of key portfolios.

Jumblatt reportedly pointed out to As Safir in a report published on Tuesday that the names proposed by Future movement to be appointed at the head of the interior ministry are not provoking nor pose any challenge to the other parties.

“We welcome the names suggested by Future movement. In my opinion they facilitate the formation of the cabinet if the disputes impeding the cabinet formation were local,” Jumblatt said.

Salam had reportedly decided to grant both the interior and defense portfolios to March 14 in addition to a proposal to hand the interior ministry to one of Future movement candidates.