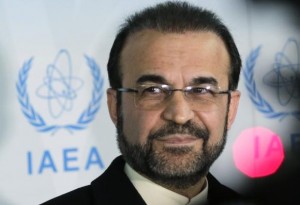 The U.N. nuclear agency said on Sunday that Iran had agreed to start addressing suspicions that it may have worked on designing an atomic weapon, a potential breakthrough in a long-stalled investigation into Tehran’s atomic activities.

The development – although limited for now – marked a step forward in an international push to settle a decade-old dispute over Iran’s nuclear programme. Tehran says this is peaceful, while the West fears that Iran wants to develop atomic arms.

The deal could also send a positive signal to separate, high-stakes negotiations between Iran and six world powers which are due to start on February 18 in Vienna, aimed at reaching a broader diplomatic settlement with the Islamic state.

Efforts to end years of hostile rhetoric and confrontation that could otherwise trigger a new war in the Middle East gained momentum with last year’s election of a relative moderate, Hassan Rouhani, as new Iranian president on a platform to ease Iran’s international isolation.

The International Atomic Energy Agency said Iran had agreed during talks in Tehran to take seven new practical measures within three months under a November transparency deal with the IAEA meant to help allay concern about the nuclear programme.

For the first time, one of them specifically dealt with an issue that is part of the U.N. nuclear agency’s inquiry into what it calls the possible military dimensions to Iran’s atomic activities. Iran has repeatedly denied any such ambitions.

It said Iran would provide “information and explanations for the agency to assess Iran’s stated need or application for the development of Exploding Bridge Wire detonators”.

Although such fast-functioning detonators have some non-nuclear uses, they can also help set off an atomic device.

“It is an important issue and it is good that the agency can now tackle it,” former chief IAEA inspector Herman Nackaerts said. But he made clear that much work remained in order to fully clarify the IAEA’s concerns: “It is a first step in a long process.”

Faced with deadlock last year in its attempts to get Iran to cooperate with its investigation, the IAEA changed tactics and now seeks to gradually build mutual trust by starting with some of the less sensitive issues, diplomats say.

Suggesting that more difficult matters would have to wait a while longer, there was no mention in the IAEA’s statement of its long-sought access to the Parchin military site, where it suspects explosives tests relevant for nuclear bombs may have been conducted a decade ago. Iran denies this.

The IAEA has been investigating accusations for years that Iran may have coordinated efforts to process uranium, test explosives and revamp a missile cone in a way suitable for a nuclear warhead. Iran says such claims are baseless and forged.

Other steps to be taken by Iran by May 15 include inspector access to the Saghand uranium mine and the Ardakan uranium ore milling plant as well as updated design information about a planned reactor the West fears could yield weapons material.

Iran will also give information on the extraction of uranium from phosphates. Uranium can fuel nuclear power plants but also provide the fissile core of a bomb if refined more.

The IAEA, tasked with preventing the spread of nuclear weapons in the world, says it needs such access and information to gain a more complete picture about Iran’s nuclear programme.

The Iran-IAEA talks are separate from, though still closely linked to, the wider diplomacy between Iran and the United States, France, Germany, Britain, China and Russia.

Shortly after Tehran and the IAEA signed their cooperation accord on November 11, Iran and the six powers clinched an interim deal to curb its nuclear work in exchange for some sanctions easing, designed to buy time for the talks on a long-term deal.

The IAEA’s investigation is focused on the question of whether Iran sought atomic bomb technology in the past and, if it did, to determine whether such work has since stopped.

The IAEA had hoped to persuade Iran in the talks finally to start addressing its suspicions. While denying them, Iran has said it will work with the IAEA to clear up any “ambiguities”.

The issue of detonator development was mentioned in a report that the IAEA prepared in 2011 containing a trove of intelligence information about alleged activities by Iran that could be used in developing atomic arms.

“Given their possible application in a nuclear explosive device, and the fact that there are limited civilian and conventional military applications for such technology, Iran’s development of such detonators and equipment is a matter of concern,” the IAEA said in the 2011 document.

It said Iran had told the U.N. agency in 2008 that it had developed such detonators for civil and conventional military applications. “However, Iran has not explained to the agency its own need or application for such detonators,” it said.