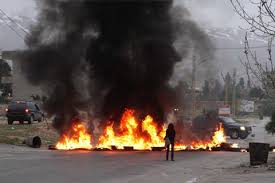 Hezbollah supporters held a sit-in near Lebanese Armed Forces barracks in north Lebanon’s Hermel on Monday, demanding permission to erect checkpoints at the entrances of the town as a preventive measure following the recent spate of car bomb attacks, according to a report by NOW.

The demonstrators also blocked a nearby road with burning tires as a sign of protest.

This comes after reports that Hezbollah has set up checkpoints around the town of Arsal.

Arsal mayor Ali al Hujairi told al Jumhouriah newspaper in remarks published on Saturday that Hezbollah militants have besieged the town and have set up checkpoints on all roads and intersections leading to the town to intimidate the citizens by inspecting all the incoming and outgoing vehicles.

He added: “They are forcing people out of their cars, demanding to see their ID’s and insisting on knowing their final destinations without showing any respect for the law of the land nor to the citizens of the this country.

In January, a car bomb ripped through the northern Beqaa town of Hermel, killing at least three people.

The explosion targeted a crowded area near Hermel’s municipal headquarters, close to the Société Générale and BLC Banks and a nearby Lebanese Armed Forces checkpoint, the report added.

Less than a month later, another suicide car bomb attack in Hermel left a four dead – the latest in a series of blasts to target Hezbollah-dominated areas in Lebanon.

It was the third bombing that the Nusra Front in Lebanon claimed responsibility for in the country.