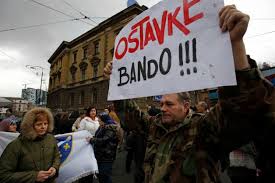 SARAJEVO, Bosnia-Herzegovina- Hundreds are marching in Sarajevo to protest alleged police abuse of people arrested during anti-government protests and to call for their release.

The head of the local police station, Mirsad Sukic, told the crowd in front of the station Sunday that none of the 44 people detained were mistreated or were minors. He says all but 10 have been let go.

Harun Cehajic, 17, showed scratches on his face and said he had just been released. He said he and others were beaten in the police station basement and not allowed to sleep for 26 hours.

Bosnians are angry over high unemployment and rampant corruption. Protesters on Friday set the presidency and other government buildings ablaze.

Photo: Bosnian people march as one holds up a sign that reads “ resignation bandits !!! ” in the Bosnian capital of Sarajevo, Sunday, Feb. 9, 2014. More than 500 people gathered in Sarajevo demanding the resignation of the government and the release of people arrested on Friday during a protest. Photo: Amel Emric, AP