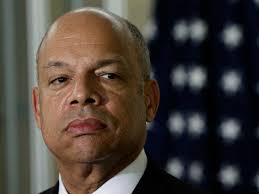 The civil war in Syria has become a threat to U.S. national security, with Westerners traveling to fight in the conflict, where extremists try to recruit them for missions back home, Department of Homeland Security (DHS) Secretary Jeh Johnson said on Friday.

“Syria has become a matter of homeland security,” Johnson said in his first policy speech since assuming the job in December.

He said U.S. authorities are paying close attention to foreign fighters heading to Syria, where an array of opposition forces includes Western-backed groups and Islamist factions.

“We know individuals from the U.S., Canada and Europe are traveling to Syria to fight in the conflict,” he said. “At the same time, extremists are actively trying to recruit Westerners, indoctrinate them, and see them return to their home countries with an extremist mission.”

Johnson, who met in Poland with his European counterparts this week, said Syria was the No. 1 topic of conversation there.

He said the threat to Americans he worries about most was from “lone wolf” extremists who do not train with al Qaeda or other militant groups but “self-radicalize” at home, as in the Boston Marathon bombing last year.

“It may be the hardest to detect, involves independent actors living within our midst, with easy access to things that, in the wrong hands, become tools for mass violence,” Johnson said in a speech at the Woodrow Wilson Center.

But he stressed that vigilance against such threats should not be at the expense of civil liberties and fundamental American values.

There, he was involved in ending the military’s ban on gays serving in the armed forces and in formulating the administration’s policy for the use of unmanned drones to strike at enemy targets.