US condemns use of barrel bombs by Assad forces 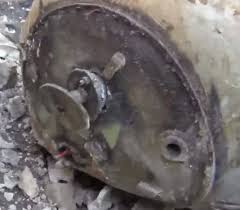 US Secretary of State John Kerry has condemned the use of barrel bombs in the Syrian city of Aleppo by forces loyal to President Bashar al-Assad.

Mr Kerry said it was the “latest barbaric act of the Syrian regime”.

Aleppo has been divided since rebels captured large swathes in 2012. Much of the Old City has been levelled by fighting.

Talks between the Syrian opposition and the government took place last week in Geneva but ended without result.

A further round is planned for next week.

Meanwhile, the Russian government has said Syria should complete the shipment of its chemical weapons out of the country by 1 March, weeks behind schedule.

The US has raised concern that Damascus has given up only a fraction of its stockpile.

The bombs are essentially oil drums or cylinders packed with explosives and metal fragments.

Five children were among those killed when bombs hit a mosque in the Masakan Hanano district, according to the Syrian Observatory for Human Rights, a UK-based activist group.

More than 150 people have been killed in the past four days in a string of similar attacks, the group says.

Witnesses say the almost daily attacks in Aleppo have prompted a mass exodus from several rebel-held districts in the east of the city.

Mr Kerry said that “each and every day that the barrel-bombing of Aleppo continues, the Assad regime reminds the world of its true colours”.

“It is the latest barbaric act of a regime that has committed organised, wholesale torture, used chemical weapons, and is starving whole communities by blocking delivery of food to Syrian civilians in urgent need,” he said.

“Given this horrific legacy, the Syrian people would never accept as legitimate a government including Assad.”

The US and its allies have been supporting the opposition’s call for a transitional government that does not include President Assad. Syria’s ally, Russia, has been resisting the move.

“While the opposition and the international community are focused on ending the war… the regime is single-mindedly focused on inflicting further destruction to strengthen its hand on the battlefield and undermining hopes for the success of the Geneva II process,” Mr Kerry added.

However, the BBC’s US state department correspondent Kim Ghattas says the Obama administration is itself facing criticism over its handling of the Syrian crisis.

As a supporter of the Geneva negotiations, the White House is being chided by Congress and in newspaper editorials for having no other strategy to deal with the conflict, she adds.

On Tuesday, Moscow confirmed that the Syrian government would attend the next round of peace talks in Geneva, scheduled for 10 February.

Mikhail Bogdanov, Moscow’s special envoy to the Middle East, said he had “no doubt” representatives of President Assad would take part.

He said he wants Mr Lavrov to pressure the Syrian government to agree to the implementation of the Geneva Communique, which calls for the formation of a transitional administration.

On Tuesday, Russia also sought to calm fears that the destruction of Syria’s chemical weapons was falling behind schedule.

The stockpile is due to be removed and destroyed by 30 June.

Deputy Foreign Minister Gennady Gatilov told the RIA Novosti news agency that the authorities in Damascus were planning “a large shipment” this month.

Under the terms of the UN-backed plan, Syrian authorities are responsible for packing and safely transporting the chemical weapons to the Mediterranean port of Latakia.