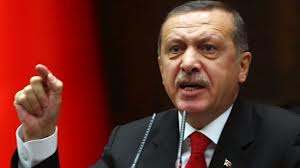 Turkey’s Prime Minister Recep Tayyip Erdogan rallied thousands of cheering supporters in Germany, home of the world’s largest Turkish diaspora, as he sought to shore up support ahead of a 17-month electoral marathon at home.

The speech Tuesday came hours after Mr. Erdogan had secured assurances from Chancellor Angela Merkel that her government would help enable the roughly two million Turkish citizens living in Germany to participate in Turkey’s first direct presidential election this summer.

A 2012 change in Turkish law will allow Turks living abroad to cast ballots for the first time in national elections, and Mr. Erdogan, who is widely expected to run for head of state, is eager for their votes.

Speaking earlier at a news conference with Mr. Erdogan, Ms. Merkel said Germany would “provide the necessary assistance” for Turkish citizens to participate.

Now in his third term, Mr. Erdogan faced unprecedented challenges last year, including weeks of public protests followed by a controversial crackdown; mounting discontent within his Justice and Development Party (AKP); and a continuing graft probe that has ensnared some of his political allies.

Still, a confident-looking Mr. Erdogan made his case to flag-waving supporters at his Berlin rally, pointing to strong growth and political stability under most of his stewardship. He pitched his party as the only one capable of making Turkey one of the world’s top-10 economies by the republic’s centenary in 2023.

“Turkey will overcome obstacles, bring down barricades and break its chains to decisively rise toward 2023. Don’t you ever look back, my brothers and sisters,” Mr. Erdogan told the 5,000-strong crowd at an indoor arena in the Kreuzberg district, home to many of the city’s estimated 300,000 Turkish residents. He urged them all to register to vote.

While the Islamist-rooted AKP still commands a formidable 45% rating in most polls, nearly double that of the main opposition party, the latest political tribulations and economic difficulties have hurt Mr. Erdogan’s image.

Turks abroad, who often have rural roots, are often more conservative than the broader electorate and could be a fresh pool of AKP support, analysts say.

Songül Esmer, a 29-year old homemaker at the rally, said: “I find he’s very honest and direct when speaking…Turkey has changed a lot under him, salaries and pensions are higher.”

Along with building support among an estimated 4 million voters overseas, Mr. Erdogan also is playing to a domestic audience, seeking to show that he remains a force in international politics.

“Erdogan’s image has been tarnished both at home and abroad, he is trying to fix it,” said Henri Barkey, an international-relations professor at Lehigh University and Turkey expert. “The general message is: ‘Look, I’m still a world leader’.”

In the corruption probe, more than 20 people have been charged with money laundering, bribery and zoning law infractions since December, all of whom deny the charges. The government has since removed one of the lead prosecutors on the case, undertaken a revision of Turkey’s judiciary and reassigned or recalled thousands of police officers in top posts.

Mr. Erdogan reiterated his characterization of the probe as an attempt by the judiciary to oust him.

“We will never allow for the national will to be hijacked with a judicial coup based on slander,” he roared in Berlin as the crowd chanted its support. “Have no worries my brothers and sisters, Turkey now has a government that looks after the national will, the ballot and the gains of the nation.”

Germany has voiced concerns about the rule of law in Turkey in the wake of the corruption charges, but the subject was only briefly mentioned Tuesday at the joint news conference, as were the street protests last summer.

“Of course, every country needs to resolve its own internal problems. Turkey has made significant headway in this regard,” Ms. Merkel said. “‘Turkey needs to show that the reforms of the last year are taking hold.”

She reiterated her skepticism about full European Union membership for Turkey yet called for “open-ended” accession negotiations to continue. The chancellor also praised Turkey’s contribution to the refugee crisis stemming from neighboring Syria, calling the situation there intolerable.

Speaking at the German Council on Foreign Relations a few hours before meeting Ms. Merkel, Turkey’s premier criticized the corruption case that forced the cabinet shuffle in December as a foreign-backed plot to derail the democratization process.

“Many traps have been set against our government to halt or slow reforms,” Mr. Erdogan said. “I hope that centers of power outside the political realm will give up on their desire for tutelage, I see this as an important step for Turkey’s normalization.”

Mr. Erdogan said seven polling stations would open on German soil for four days ahead of both rounds of the presidential election.

A German government official said they would come on top of the numerous diplomatic and consular offices where Turkish voters also will be able to cast a ballot. “That is how other countries do it, but given the size of the community here, Turkey will need more space. That is what’s unprecedented about it,” the official said.

An agreement in principle sealed by Ms. Merkel and Mr. Erdogan calls for the Turkish government to propose locations, which the German side would vet. Germany would be responsible for security around the polling stations.