Pakistani govt fails to show up at Taliban peace talks 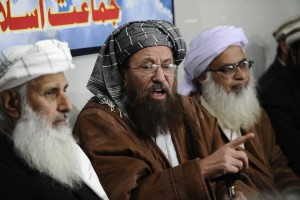 Pakistani government representatives failed to appear on Tuesday for the scheduled start of peace talks with the Taliban, forcing the postponement of the talks and drawing a sharp rebuke from the militants’ representatives.

The episode added to the swirl of contradictory statements, confusion and delays that have surrounded the peace initiative since last week, when Prime Minister Nawaz Sharif made the surprise announcement that a four-member delegation would hold talks with the Pakistani Taliban.

In turn, the Taliban named five public figures, including the opposition politician Imran Khan, to represent them in the talks. But Mr. Khan and another of the five refused to do so.

The three remaining designees, led by Maulana Sami ul-Haq, a prominent religious scholar with close ties to Taliban leaders, said on Monday that they would meet the next day with the government representatives in Islamabad, the capital.

But on Tuesday the government side balked.

Irfan Siddiqui, the coordinator of the government delegation, said it was not clear whether Mr. Haq and his fellow representatives had a mandate and the authority to speak for the insurgents.

Mr. Haq, fuming, told reporters at an afternoon news conference: “It would have been better if the government side had met us. It is a God-sent opportunity that we are acting as a bridge between the government and the Taliban.”

The government side eventually indicated a willingness to meet in the evening, but by then the Taliban representatives had left Islamabad.

No new meeting date was announced. Pakistani analysts said they expected the talks to get underway eventually but did not expect them to yield any resolution of the conflict with the Taliban, which has racked the country in recent years.

“Both sides have strong wish lists, but they don’t have any methodology to achieve their wishes,” said Hasan Askari Rizvi, a prominent Pakistani academic and political analyst in Lahore.

Mr. Rizvi said that choosing mainstream religious leaders to represent them at the talks had been a “shrewd move by the Taliban.”

“On the one hand, they stay out and hold indirect talks with the government,” he said of the Taliban leaders. “On the other, they keep the veto power with themselves and leave the religious leaders open to criticism in case the talks fail.”

Analysts said the Taliban wanted to start the talks but then prolong them, believing that while talks were underway the government would hold off taking any major military action against the group.

The United States has been pressing Pakistan to mount an offensive in North Waziristan, the rugged tribal region that has been a haven for Taliban and Qaeda militants operating in Pakistan and Afghanistan.

Before Mr. Sharif announced the delegation, Pakistani officials had been signaling for weeks that such an offensive was being prepared.

“Nawaz draws his strength from the political right, especially in Punjab Province, his power base,” Mr. Rizvi said. “There is a strong sympathy there for talks, and the religious leaders feel that a solution can be worked out through dialogue.”

However, the Pakistani military, under the new army chief, Gen. Raheel Sharif, has favored using force to deal with the militants.

“If the talks eventually fail, which is highly likely, Nawaz will be left with no option but to support a military action,” Mr. Rizvi said. “If he does not, then there will be a serious civil-military crisis.”

Najam Sethi, a television talk-show host and the editor of an influential weekly newspaper in Lahore, The Friday Times, said he thought the prime minister had never expected the talks to lead to a breakthrough and had had other objectives in mind when he announced the peace initiative.

“My sense is it was a good tactical move by Sharif, as it exposed those who were against military action and neutralized political opponents like Imran Khan,” Mr. Sethi said.

He added that he now believed the government would go ahead with an offensive in North Waziristan in late February or early March.

“Behind the scenes, the military and civilians have agreed on a military action,” he said.

Photo: Members of a group chosen by the Taliban to represent them in talks with Pakistan. The talks were postponed on Tuesday. T. Mughal/European Pressphoto Agency