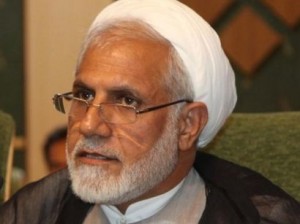 As Iran and world powers move closer to a long-term agreement over the Islamic republic’s nuclear activities, domestic political struggles here are threatening to undermine the diplomatic process, which both the White House and the administration of Iran’s president, Hassan Rouhani, say is on the right track.

Despite wide public support and the approval of important blocs of politicians and clerics, a range of opponents, mostly in Iran’s parliament, worry that they could lose influence if a solution to the nuclear dispute is struck without their involvement in the negotiations.

The tough line taken by Iranian lawmakers mirrors that of Republicans in the U.S. Congress, who are pushing for more sanctions on Tehran. President Obama has vowed to veto any new sanctions legislation while talks are ongoing.

On Monday, Iran’s foreign minister, Mohammad Javad Zarif, told the German Council on Foreign Relations that “with good will, we can reach an agreement within six months.”

But skeptics in Tehran and Washington caution against rushing into a deal that could favor the other side.

With new talks scheduled to begin in Vienna on Feb. 18, these figures are becoming increasingly critical of the Islamic republic’s negotiating team.

“The West has so far not shown any serious intention to solve this issue that they created themselves,” Vahid Ahmadi, a cleric and lawmaker who sits on the parliament’s foreign policy commission, said in a session of parliament Monday. “Although we will keep our commitments, we will never cross our red line, which is to maintain our nuclear achievements.”

Since the nuclear dossier was transferred to the control of Iran’s Foreign Ministry soon after Rouhani took office, the hard-line press and conservative members of the parliament have sought to require more oversight in future rounds of nuclear talks, citing a lack of transparency as their biggest complaint.

“I am telling our nation today that we are neither informed of foreign policies of this government nor of what they are doing domestically. They are doing whatever they like,” Mehdi Kouchakzadeh, a lawmaker and harsh critic of the government, said in parliament Monday.

On Sunday, in a sign that conservatives may be regaining some political clout lost since Rouhani’s election, members of the foreign policy commission said they had reached an agreement with the administration to add a member of parliament to the negotiating team, which will probably quiet some of the loudest critics among them.

Members of Iran’s political establishment who have long argued that the conflict with the United States is an existential one, and who consider normalized relations incongruous with decades of anti-Western policy and rhetoric, stand to lose the most if a compromise is reached, analysts say.

For these hard-liners, “the mere reaching of an agreement will cause an ideological crisis,” said U.S.-based Iran analyst Farideh Farhi, who recently returned from several months in Iran.

Beyond the political arena, there are others profiting financially from sanctions on Iran who would lose if conditions are normalized.

“There are many vested interests that see little benefit in Iran opening up to the world. These interests are both political and economic, and sometimes both,” said Mohammad Ali Shabani, a Tehran-based analyst.

The most notorious case is that of Babak Zanjani, who amassed billions of dollars selling oil that illegally evaded sanctions. Zanjani is being held in Tehran’s Evin prison on corruption charges.

Currency speculators also fall into this category and have profited heavily from the discrepancy between official and street rates, as well as stoking public concerns about a collapse of Iran’s currency, the rial.

“Our people expect the president to expose those who are exploiting the sanctions to the nation and judiciary,” Kamaloddin Pir Moazen told fellow members of the parliament this week.

While identifying many of the individuals and entities that are illegally profiting from sanctions is difficult, there are also vast Iranian companies, including automakers, food producers and petrochemical firms, that benefit from the longtime lack of competition caused by the sanctions.

“It’s not only sanctions exploiters that see rapprochement as inopportune. Many sectors of the Iranian economy are essentially run as monopolies. A truly free market, fully integrated into the global economy, will lead to the downfall of these entities,” Shabani said.

Despite these vocal opponents of compromise, there is consensus among the majority of the political establishment, as well as Iran’s private-sector business community, that finding a solution to the decade-long nuclear dispute would serve the country’s interests.

“The Iranians would like very much to have a deal, but at the same time, they’re not willing to give up their sovereignty for an agreement,” said Mohammad Marandi, a political commentator and professor at Tehran University.

Photo: Vahid Ahmadi, a cleric and lawmaker who sits on the Iranian parliament’s foreign policy commission