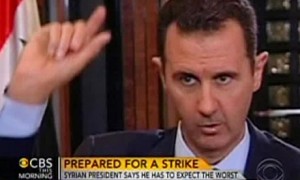 The U.S. blamed Syria’s Assad regime for intentionally delaying efforts to remove chemical arms from the country for destruction, suggesting that the goal of liquidating the arsenal by midyear is in jeopardy.

The comments on Thursday mark a sharp change of tone from the Obama administration, which would face a stark choice if it concludes President Bashar al-Assad isn’t cooperating with the disarmament process. Until now, diplomats have praised the regime for destroying some arms-making gear and for cooperating with inspection efforts.

The U.S. decision to make public its criticisms comes at a time of deep dismay in Washington over how the Assad regime is handling talks with the opposition in Geneva that are intended to end Syria’s civil war and install a transitional government. The timing also reflects U.S. concerns that Mr. Assad isn’t taking his obligations seriously and is about to miss a second deadline for the removal of chemicals.

Some diplomats suggest that Mr. Assad’s delay might be designed to enhance his leverage in those talks and reflect his growing confidence in his regime’s survival. His position on the battlefield has strengthened in the face of a splintered opposition with limited foreign support.

It was unclear whether the Organization for the Prohibition of Chemical Weapons, The Hague-based group overseeing the destruction, would back up the U.S. accusation or leave Washington as the sole voice of confrontation.

Defense Secretary Chuck Hagel on Thursday said he made a personal appeal to his Russian counterpart to use Moscow’s influence with Damascus to bring the Assad regime back into compliance.

U.S. officials didn’t mince words over Syria’s disarmament process. Robert Mikulak, the U.S. representative to OPCW, told the agency’s executive council that the process had “seriously languished and stalled.” Just 4% of Syria’s 530 metric tons of most-dangerous chemicals have been removed, he said, despite a Dec. 31, 2013, deadline for removing all of them.

The OPCW was expected to issue a statement Friday. The agency may find itself in a delicate spot, eager to encourage Mr. Assad to speed up the process but reluctant to align itself too closely with the U.S., especially because it needs Syrian cooperation to continue the disarmament.

Syria’s information ministry rejected the U.S. criticism. “We have adhered to the timetable,” a Syrian official said. “There may be a few delays, but the OPCW are not unhappy. I think the Americans are trying to provoke an incident….The OPCW are the ones carrying out the work, and they are quite happy.”

The chemical-arms standoff could pose a challenge to President Barack Obama, who threatened military strikes against Syria last year following a chemical-weapons attack on a Damascus suburb that killed more than 1,000 people. He backed away from using force after a U.S.-Russian accord that Mr. Assad’s chemical arsenal would be destroyed.

The Assad regime has blamed delays in removing chemicals out of the country on a need for armored jackets, improvised explosive device detectors, and other security equipment to transport the chemicals from 12 storage sites to the Syrian port of Latakia, where they are to be loaded on Danish and Norwegian ships.

But Mr. Mikulak dismissed those claims. “These demands are without merit, and display a bargaining mentality rather than a security mentality,” Mr. Mikulak told OPCW in The Hague in a closed-door meeting, according to the text provided by U.S. officials. “There should be no doubt that responsibility for the lack of progress and increasing costs rests solely with Syria.”

Critics of the chemicals process, including some Syrian rebel leaders, have complained that it stands to give Mr. Assad unmerited legitimacy, letting him position himself as a responsible head of state cooperating with disarmament efforts.

While the U.S. believes the Assad regime has gathered inside Syria the chemical precursors slated for destruction under the accord, American officials said they became alarmed by indications that the regime was delaying taking the final steps needed to prepare the materials for export.

“We are concerned about a bottleneck,” a U.S. official said.

The crucial question remains whether a June 30 deadline for destroying Syria’s entire chemical program—a date set by the U.S. and Russia, with Syria’s acquiescence—can still be met. OPCW Director-General Ahmet Uzumcu said as recently as Jan. 16 he was confident it could. He made no comment on Thursday.

But on Thursday, Mr. Mikulak suggested that was in doubt. “Syria’s requests for equipment and open-ended delaying of the removal operation could ultimately jeopardize the carefully timed and coordinated multistate removal and destruction effort,” he said.

Mr. Hagel said he urged Russian Defense Minister Sergey Shoygu to encourage Russia’s Syrian ally to comply with the disarmament process. “I do not know what the Syrian government’s motives are,” the U.S. defense secretary said. “What we do know is they are behind. What we do know is that they need to fix this.” Moscow made no comment.

The international community has been signaling it is ready and eager to proceed with the disarmament. Once the chemicals are loaded onto Danish and Norwegian ships, they are to be taken to a U.S. ship, the MV Cape Ray, for destruction in international waters.

The Cape Ray sailed from Norfolk, Va., on Monday, and is expected to reach the Mediterranean within days.

But just a few tons of high-priority chemicals from Syria, which include mustard agent and a sarin precursor called DF, have been brought to the Syrian port and loaded onto the foreign ships so far, on Jan. 7 and 27, the OPCW officials said. U.S. officials are now demanding that Mr. Assad outline a specific plan for transferring the rest of his arsenal at regular intervals.

Meanwhile, only a small percentage of the 500 metric tons of less-lethal chemicals has been transferred, officials said, making it likely a Feb. 5 deadline for removing those substances will also be missed.

The dispute that broke into the open Thursday doesn’t only concern transporting the chemicals. Damascus has promised to destroy the facilities it used in chemical-weapons production. But now it is proposing that seven hardened aircraft hangars and five tunnels be “inactivated” instead, for example by welding doors shut. The U.S. argues that such measures could be quickly reversed, and has proposed instead that the hangars’ roofs and the tunnels’ portals be collapsed.

By NAFTALI BENDAVID and ADAM ENTOUS