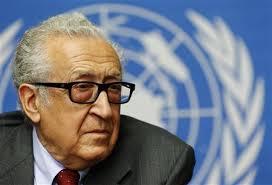 After a “tense but rather promising” meeting today between representatives of the Syrian Government and the main opposition group on reaching a political end to the country’s three-year-civil war, the United Nations/Arab League mediator said that the first round of talks will end tomorrow with no serious breakthrough or “any real change in position” of either side.

Speaking to reporters in Geneva after what he described as a “fairly long meeting” where the two sides discussed “sensitive” matters regarding the security situation and terrorism in Syria, Lakhdar Brahimi, Joint Special Representative of the United Nations and the League of Arab States said that the first round of talks would wrap up after a little more than a week.

“Tomorrow morning will be our last session. I hope that we will try…to draw some lessons about what we did and see if we can organize ourselves better for the next session. I think that’s enough for a beginning,” said Mr. Brahimi, expressing the hope that when the talks reconvene – reportedly in February – “we will be able to have a more structured discussion.”

Since the conflict erupted in March 2011 between the Government and various groups seeking the ouster of President Bashar al-Assad, well over 130,000 people have been killed and nearly 9 million others driven from their homes. More than 9.3 million people within the country need humanitarian aid, the UN has said, with over 2.5 million of them living in areas where access is seriously constrained or non-existent.

The goal of the talks, under way in Switzerland since 24 January, is to achieve a political solution to the Syrian conflict through a comprehensive agreement between the two sides for the full implementation of the Geneva communiqué, adopted after the first international meeting on the issue on 30 June 2012, and since endorsed by the UN Security Council.

The communiqué lays out key steps in a process to end the violence. Among others, it calls for the establishment of a transitional governing body, with full executive powers and made up by members of the present Government and the opposition and other groups, as part of agreed principles and guidelines for a Syrian-led political transition.

While noting that the two sides agreed today that “terrorism does exist in Syria and that is a very serious problem”, Mr. Brahimi said no agreement was reached on how to deal with it. However, the rival delegations did agree to hold a moment of silence to honor victims of the civil war – “no matter which [side] they belong to.”

Overall, Mr. Brahimi said, “we haven’t noticed any major change, to be honest, in the two sides’ positions,” and he expressed deep disappointment that there was no movement on allowing UN aid convoy into Homs, and on allowing civilians to leave the besieged city, cut off from supplies.

“I am …very, very disappointed, because the situation in Homs is bad and has been bad for months, years even. That is the first place very bad fighting and destruction has taken place,” he said, though he added that negotiations are still ongoing.

Turning to another issue of major concern, Mr. Brahimi said that negotiations have also been under way regarding the Yarmouk refugee camp in Damascus, and today, some aid has gone in. “So, a partial solution in Yarmouk, but no solution yet in Homs,” he said.

The UN Relief and Works Agency for Palestine Refugees in the Near East (UNRWA) has confirmed that was able to deliver aid to the residents trapped in Yarmouk.

According to UNRWA Spokesperson Chris Gunness, the agency distributed over one thousand food parcels to the Palestinians in the camp, the first such aid since 21 January, when it had distributed 138 food parcels. “We are encouraged by the delivery of this aid and the cooperation of the parties on the ground. We hope to continue and increase substantially the amount of aid being delivered because the numbers of those needing assistance is in the tens of thousands,” said Mr. Gunness, stressing that number includes some 18,000 Palestinians, among them women and children.

“We need to build on today’s modest achievement. UNRWA and the international community urgently need secure, substantial and permanent humanitarian access,” he said.