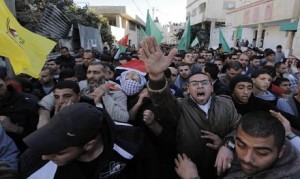 Israeli soldiers shot and wounded 10 Palestinians near the West Bank town of Ramallah during a protest Friday over the killing of a teenager, Palestinian medics and security sources said.

In Gaza, meanwhile, medics said five more Palestinians were wounded by Israeli army gunfire near the border fence with Israel.

The sources said the Palestinians in the West Bank were hit by live rounds on the outskirts of Jalazun refugee camp and hospitalised in Ramallah, including one with serious injuries.

Hundreds of Palestinians took part in the protest, many of them hurling rocks at the soldiers.

The demonstration was called to protest at the Israeli army’s killing on Wednesday of Mohammed Mubarak, a 19-year-old from Jalazun working on a project funded by USAID and son of the camp’s locally elected leader.

The army said he was shot dead near a Jewish settlement outside Ramallah after opening fire on them, but witnesses insisted he was unarmed.

Palestinian housing and public works minister Maher Ghneim has condemned what he branded the “cold-blooded killing” of a labourer working on a project run by the ministry in coordination with USAID.

Ghneim said the youth had been “carrying a sign to direct the traffic” when he was shot.

A total of 27 Palestinians were killed by the Israeli army in the West Bank in 2013, three times more than the previous year, figures from Israeli rights watchdog B’Tselem showed.

In central Gaza, five Palestinians were shot and wounded Friday as they threw rocks at soldiers on the other side of the border fence, medics said.

An army spokeswoman, contacted by AFP, said dozens of demonstrators hurled rocks and had approached the fence inside a military exclusion zone.

The soldiers first fired warning shots before targeting the protesters, she said, adding that at least one Palestinian was hit.

Update : Other reports indicated that 30 Palestinians were wounded today by Israeli army fire