Syria rivals agree to use Geneva 1 as basis for talks 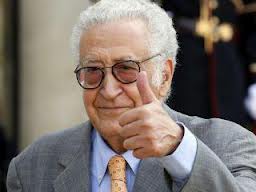 Talks aimed at ending the war in Syria took a first tentative step forward on Wednesday as both sides agreed to use the same document as the basis of discussions, although they disagreed about how the negotiations should proceed.

Both sides said they agreed to use the “Geneva communique”, a document agreed at a previous international conference in Geneva in June 2012, and which sets out the stages needed for an end to the fighting and a political transition.

“We have agreed that Geneva 1 is the basis of the talks,” opposition spokesman Louay al-Safi told reporters, referring to the 2012 communique.

Bouthaina Shaaban, a Syrian presidential adviser, said there was agreement on using the text, but with some reservations.

While the opposition wants to start by addressing the question of the transitional governing body that the talks aim to create, the government insists that the first step is to discuss “terrorism”, and not jump into the middle of the text.

The government describes those fighting to overthrow President Bashar al-Assad as terrorists. The opposition says transitional arrangements must include the removal of Assad, which the government rejects.

Despite the differing interpretations of Geneva 1, organizers of the talks at United Nations headquarters in Geneva have been at pains to keep the process going and dissuade either of the sides from walking out.

Syrian state television said the government wanted to discuss the text of Geneva 1 “paragraph by paragraph”.

“Mr Brahimi said tomorrow they are going to discuss terrorism because stopping terrorism is the first issue that should be handled,” Shaaban said. “Even in Geneva 1 the first item is to stop violence which has turned to terrorism.”

There was no immediate confirmation from international mediator Lakhdar Brahimi, who is chairing the talks. On Tuesday he said both sides were talking to the media too much and should respect the confidentiality of the talks and not overstate their case.