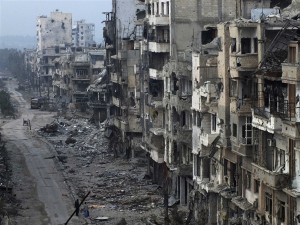 Twelve aid trucks remained on standby outside the besieged Syrian city of Homs Tuesday, as ongoing talks in Geneva between the government and opposition groups stalled once more.

The much-needed aid could be dispatched quickly once agreement is reached, according to officials at the United Nations World Food Program working in the war-torn country.

Pressure is mounting on the Syrian government to find a solution to allow aid to get into the city – a key battleground in the country’s deadly civil war.

A tentative agreement was reached in Geneva Sunday for the evacuation of women and children, but there is still no deal on how it can be safely implemented.

Forces loyal to President Bashar Assad regained control of surrounding areas last year, leaving opposition rebels under siege in the city, along with thousands of civilians. But the security situation is complicated by the local presence of al Qaeda-affiliated fighters who do not recognize the current talks.

“Food trucks are on standby to be immediately dispatched once an agreement is reached,” said WFP spokeswoman Abeer Etefa.

Negotiations at the so-called “Geneva 2” round of talks broke off earlier than planned Tuesday.

Louay Safi, a member of the opposition’s negotiating team, said it had proposed lifting sieges in three rebel-held towns and villages, The Associated Press reported.

Murhaf Joueijati, a member of the opposition Syrian National Coalition’s negotiating team, told reporters the Geneva talks were breaking off for the day to give time for the government to make its proposal about the future of the country.

“We do not know what to expect tomorrow. They are going to try to change the subject yet again,” he told the AP.