Egypt’s Sisi: The Field Marshal Who Could Be Pharaoh 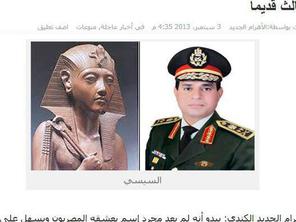 The prospect of Abdul Fattah al-Sisi becoming Egypt’s President offers, at the minimum, the virtue of clarity. The Egyptian military that on Monday “mandated” its chief of staff to stand for President has never actually been out of power in the Land of the Pharaohs. Sisi became its public face only on July 3 last year, the day the career soldier stepped before a microphone and announced the removal of the only freely-elected government in the nation’s thousands-year-old history.

The ecstatic cheers that greeted the announcement spoke volumes about Egypt’s disenchantment with the clannish and tin-eared Muslim Brotherhood administration that Sisi sent packing. The adulation also demonstrated the comfort level of many ordinary Egyptians for being ruled by men in uniform. In many countries where a military coup has taken place, the etiquette calls for a firm suggestion that the top brass, having performed a distasteful but necessary duty, leave the field of politics and “go back to their barracks.” In Egypt, the cry being heard after Sisi’s nomination was: “The military and the people are one hand.”

It was heard in Tahrir Square almost three years ago to the day. The Supreme Council of Armed Forces, soon to be widely known by the scabrous-sounding acronym SCAF, issued Communique No. 1, a statement supporting the “legitimate demands” of protesters demanding the removal then of Hosni Mubarak as President. Like Anwar Sadat before him, and Gamal Abdel Nasser before Sadat, Mubarak was a military man. “You know, we’ve always had the military running things,” a liberal activist told me on the banks of the Nile, shortly after Morsi had been removed. “It’s as much a part of Egypt as the Nile.”

Sisi is the latest, if least known, in the line. Born in Cairo in 1955, he was raised in a modest home in the Gamaleya neighborhood. His father made furniture; his mother was described in rare published profiles as devout. Sisi joined the military as a career soldier. Though he never saw combat – Egypt’s last war was in 1973, against Israel, and he graduated from officer’s school four years later – he rose steadily through the ranks, going abroad to study in Britain and, more important, the United States.

Washington’s intimate involvement with the Egyptian military dates back more than a century, to the 18 veterans of the American Civil War who arrived to train its armed forces in 1869. It was the Americans who first urged the establishment of the staff and naval colleges that dominate any map of Cairo today; the military also dominates a large portion of the Egyptian economy. The relationship with the United States remained strong, both through exchanges like the one that brought Sisi to the U.S. War College to study for a master’s degree in 2006, and the $3 billion in direct military aid that flowed from Sadat’s decision to sign a peace treaty with Israel in 1979.

A portion of the money was withheld after the July 3 coup, a vacillation that Sisi denounced bitterly. But the vital relationship persists. Sisi and U.S. Secretary of Defense Chuck Hagel speak on the phone regularly.

Sisi’s popularity on the Egyptian street was like his sudden emergence in the top ranks of its military—elevated in 2012 to the post of defense minister by President Mohamed Morsi, an Islamist whose scant year in office was defined by a majoritarian impulse and rising distrust of the Brotherhood that too-long remained his point of reference. Sisi had replaced Field Marshall Mohamed Hussein Tantawi, a septuagenarian shunted aside by Morsi in what was then seen as a deft and felicitous political move. In time it was understood as a changing of the guard supported by a younger generation of officers. When Sisi joined the general staff, he was among the youngest at the table, and held the intelligence portfolio.

That Morsi selected him in his cabinet suggested a level of comfort with Sisi’s Muslim faith. In a detail that was widely repeated as evidence of his family’s piety, one of the general’s daughters was reported to wear the niqab, which covers the entire face. But the general made clear in public statements that his priority was Egyptian unity and that the military would be its guarantor. First privately – and finally, publicly and angrily – Sisi was dismayed at Morsi’s rejection of his overtures to bring the Brotherhood and other stakeholders in Egypt’s future together to hash out their differences. By late June of 2013, the overtures had turned to ultimatums—calling for people to take to the streets to signal their appetite for a military intervention.

“We understand also that the military’s intervention to support the Egyptians was not a surprise,” Sisi told the Washington Post’s Lally Weymouth a few weeks after the coup. “We can go back [through] my statements, starting with my invitation to the political powers in Egypt to come to a negotiating table for reconciliation in November of last year until the last 48-hour deadline I gave the president and the political powers to come to a compromise.”

The military wrapped its takeover not only in the flag, but also the original 2011 uprising—in the days after July 3, Egyptian flags were draped from helicopters, painted in the sky by fighter jets and dropped by the thousands over Tahrir Square. And the armaments were not just for show: hundreds of Brotherhood supporters have been shot in the streets, and the organization declared a terrorist group. With a shooting war with religious extremists under way in the Sinai peninsula, the lines between political Islam and extremism have disappeared, at least in the public space that the Egyptian military has taken over. A new constitution passed a referendum with the kind of support – 98 percent – associated with the sham presidential elections under Mubarak. Activists who dared post a sign urging a “no” vote were taken into custody.

Through it all, Sisi — all but unknown two years earlier — appeared to grow more comfortable with the role, left vacant since Mubarak, of the Indispensable Man. He was promoted to Field Marshal just a few hours before being nominated by his fellow officers as the nation’s president.

“I have a long history with visions,” Sisi is heard to say in an interview session with a friendly journalist, on a tape that later leaked. “For example, I once saw myself carrying a sword with ‘No God but Allah’ engraved on it in red…In another, I saw President Sadat, and he told me that he knew he would be president of Egypt so I responded that I know I will be president too.”

It hasn’t happened yet. But after Monday’s events, the Field Marshal’s election has taken on a certain fore-ordained quality.