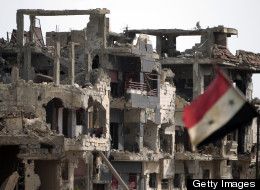 The Syrian peace talks in Geneva are deadlocked over the divisive issue of transferring power to a transitional government, sources say.

The Syrian government team reportedly presented a “declaration of principles” that did not mention transfer of power, and it was rejected by the opposition.

The sides are divided on the future role of President Bashar al-Assad.

There has been no progress reported either on allowing aid convoys into besieged areas of the city of Homs.

‘Eating Grass’
The peace talks resumed in Geneva at 10:00 GMT, the UN said.

But Syrian state media and opposition delegates both later reported that the government’s declaration of principles had been rejected by the opposition.

The declaration reportedly insisted that Syrians choose a political system without “imposed formulas” from outside, while also insisting on discussing “terrorism” rather than transfer of power.

The opposition insists that the regime commits in writing to the Geneva I communique, which calls for a transition process.

Rima Fleihan, a member of the opposition National Coalition’s delegation, said: “The discussions were not constructive today because of the regime’s strategy to deflect [and] change the subject by talking of terrorism.”

Opposition chief negotiator Hadi al-Bahra added: “The declaration is outside the framework of Geneva. It fails to address the core issue.” 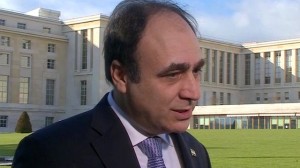 Opposition delegate, Monzer Akbik, earlier said the teams had to discuss the make-up of the transitional body.

He said: “The people not acceptable are the people who committed crimes against humanity and war crimes including Assad and his associates who have blood on their hands.”

Sources said that after the declaration was rejected, UN mediator Lakhdar Brahimi had to adjourn the session.

He said: “We are here to discuss terrorism, not a transfer of power.”

The UN plan to send humanitarian aid to Homs, where hundreds of people have been trapped in the Old City since June 2012, was also on the agenda.

Brahimi had said he hoped a humanitarian convoy would set off on Monday.

However Akbik, said there had been no progress.

He said: “The city of Homs, the Old City of Homs, is still under starvation siege and there is no progress also in the releasing of prisoners.

“The regime is saying that it’s going to allow the convoys. There are 12 trucks [from the] Red Crescent waiting there for the regime to allow them in, but they are not allowed in yet.”

Mekdad had said on Sunday that women and children were free to leave the city. He alleged armed groups were preventing them from doing so.

On Monday, the US said Syria’s evacuation offer was not sufficient, insisting that all civilians should be permitted to leave and aid convoys allowed in.

State department spokesman Edgar Vasquez said: “The situation is desperate and the people are starving.

“There should be no reason for delay. The regime must act now.”

One journalist inside Homs told the BBC that aid in the besieged areas had run out and people were eating grass and shrubs. He said those who fell sick had no access to medicine and no way of leaving the area.

“We are under deadly siege. If we don’t die from bombardment or snipers, we die of hunger or the cold,” he said.

On Sunday, Mr Brahimi admitted the Geneva talks were proceeding slowly but said that on Monday he “expected the two parties to make some general statement about the way forward”.

He said it was “too early” to assess the prospects of a comprehensive deal.

The violence has also driven 9.5 million people from their homes, creating a major humanitarian crisis within Syria and for its neighbors.

The opposition and government are fundamentally divided over the aims of the conference.

The opposition insists that the regime commits in writing to the Geneva I communique, which calls for a transition process.

A UN-backed meeting in 2012 issued the document and urged Syria to:

Top Photo: A general view shows the Syrian flag flying next to destruction in the Bab Amro neighborhood of Homs . AFP PHOTO/JOSEPH EID