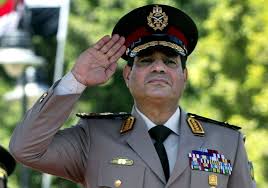 Egypt’s army chief, Gen. Abdel-Fattah el-Sissi, who led last summer’s coup ousting the Islamist president, was promoted Monday to the military’s top rank, field marshal, an honor that could be a prelude to his stepping down to run for president in elections due by the end of April.

The promotion, announced by Egypt’s interim president, came after large crowds held rallies over the weekend calling for el-Sissi to run. Private newspapers close to the military ran front-page headlines on Monday saying he would announce his candidacy soon.

El-Sissi, who held the rank of general before Monday’s promotion, has yet to announce his intentions. Supporters have touted him as the nation’s savior after he removed Islamist President Mohammed Morsi on July 3 following days of massive protests by millions of Egyptians demanding Morsi step down. Since then, security forces have waged a fierce crackdown on Morsi’s Muslim Brotherhood and other Islamists, arrested thousands and killing hundreds, even as the group continues protests demanding Morsi’s reinstatement.

The Supreme Council of the Armed Forces — the military’s top body of generals, headed by el-Sissi — was meeting Monday, military spokesman Gen. Ahmed Mohammed Ali told The Associated Press. He would not give details and said he could not comment whether the promotion is related to the possibility of el-Sissi running.

The promotion gives el-Sissi the same rank held by his predecessor, Mohammed Hussein Tantawi, who was army chief and defense minister for years under former President Hosni Mubarak and who then stepped in as military ruler for nearly 17 months after Mubarak’s ouster in the 2011 uprising. After Morsi, Egypt’s first freely elected president, was inaugurated in 2012, he removed Tantawi and installed el-Sissi.

Retired Gen. Hossam Sweilam, an analyst who remains close to the military, said he believes the promotion was meant as a final honor before el-Sissi runs.

“This is a belated move by the state to honor the man who removed the Muslim Brotherhood from power,” he told The Associated Press. “This is to pave the way for him to leave the military while holding the highest title and contest elections.”

By law, a current member of the military cannot run for the presidency. A day earlier, interim President Adly Mansour, announced that presidential elections would be held first, followed by parliamentary elections, switching the order first laid out in a transition plan put forward by the military after Morsi’s ouster.

The presidential elections comes against backdrop of an Islamic militant insurgency that has spread since Morsi’s ouster, with a rise in attacks that initially intensified in the Sinai Peninsula but have since increasingly taken place in the capital, Cairo, and other cities, mainly targeting police and the military. The government branded the Brotherhood a terrorist organization, accusing it of orchestrating the violence. The group denies the charge, saying it is aimed at justifying the crackdown.