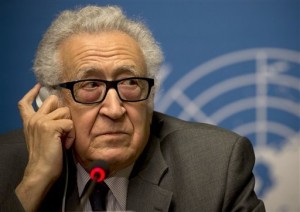 Syria’s opposing parties discussed aid and prisoner releases on Sunday in talks aimed at building some kind of trust before tough political negotiations, but there was no sign of the early progress sought by an international mediator.

Russia, one of the talks’ sponsors, said any agreement on easing the humanitarian crisis created by the Syrian civil war would help to improve the atmosphere at the Geneva talks, but acknowledged that positions were polarized, emotions were on edge and the situation remained extremely grave.

Following their first face-to-face talks on Saturday, government and opposition representatives met again in the presence of mediator Lakhdar Brahimi on Sunday morning and were due to hold a second session later in the day.

Opposition figures said they presented a list of 47,000 detainees whose release they are seeking, as well as 2,500 women and children whose freedom they say is a priority.

Opposition delegate Monzer Akbik said the government had promised to answer a request for aid to be let into the rebel-held center of Homs city, besieged by President Bashar al-Assad’s forces for 18 months, where the opposition says 500 families urgently need food and medicine.

“The regime said they will have to go back to Damascus to make a final decision on this and they will give an answer later today,” Akbik said. “This is a stalling technique … We have noticed lack of seriousness from the regime side.”

Homs was one of the early centers of protest against Assad’s rule which erupted in 2011 before Syria slid into civil war. Since the start of the crisis more than 130,000 people have been killed, two million have become refugees and around half the country needs aid, the United Nations says.

Russian Foreign Minister Sergei Lavrov said he hoped the talks could be conducted in a more business-like manner after the two sides exchanged bitter recriminations during a preliminary day of speeches last Wednesday.

In an interview with NTV television, he called for progress on aid, unblocking besieged areas and prisoner exchanges.

“All this would strengthen trust and affect the atmosphere at the talks in Geneva. Beyond this it is very difficult to make guesses; the situation is extremely grave, positions are polarized, emotions are on the edge,” he said in comments posted on the Foreign Ministry’s web site.

Faced with finding common ground between two intractably opposed parties, Brahimi dedicated the first two days of talks to humanitarian issues, hoping to create a platform on which to build the far tougher political talks.

He plans to start addressing on Monday what he has called the core issue of the talks – implementing a June 2012 accord which called for the establishment of a transitional governing body by mutual consent. The opposition says that means Assad must go, a demand the government has dismissed out of hand.

GENEVA ACCORD “NOT SACRED”

Brahimi described Saturday’s sessions as a good beginning but conceded that little progress was achieved, and government delegates took issue with his strategy of addressing specific issues instead of the overall conflict.

“The other side came here to discuss a small problem here or there. We came to discuss the future of Syria,” presidential adviser Bouthaina Shaaban said outside the United Nations headquarters in Geneva, where the two sides are holding indirect talks – gathered in the same room across two sides of a U-shaped table, but addressing their remarks through Brahimi.

“We did not come here to bring relief to a region here or a region there. We came here to restore safety and security to our country,” she told reporters.

Shaaban said the government would not veto any topic and was ready to discuss the 2012 Geneva accord, but that “doesn’t mean every word of Geneva is sacred”.

The statement was issued 18 months ago under very different circumstances, Shaaban said, also accusing the opposition of focusing exclusively on demands for a transfer of power and ignoring its call for an end to violence.

“Geneva is not the Koran, it’s not the Gospel,” she told reporters. “Geneva was issued in June 2012. We are now January 26, 2014. The ground has changed. We change according to what this reality requires.”

In the summer of 2012 rebel forces took control of much of Aleppo, Syria’s biggest city, and were challenging Assad’s forces on the edge of Damascus. Since then, backed by Lebanese Hezbollah fighters and Iranian military commanders, Assad’s forces have halted the rebel advances and consolidated control over the center of the country, although there is little sign of them retaking swaths of rebel-held territory in the east.

British Foreign Secretary William Hague said the talks had to focus on implementing the 2012 Geneva 1 accord.

“It’s good if what are described as confidence building measures can be adopted to get humanitarian relief into certain areas, to have prisoners released,” he told the BBC. “But the real test of these talks is will the regime really engage, this coming week, on setting up a transitional government.”

Syrian Information Minister Omran Zoabi said there was no chance of Assad surrendering power. “If anybody thinks or believes that there is a possibility for what is called the stepping down of President Bashar al-Assad, they live in a mythical world and let them stay in Alice in Wonderland.”

Responding to the request for humanitarian access in Homs, he said: “All Syrian cities are equal and as important. All neighborhoods in any region every residential area, every city, no matter how small… All are as important as Homs.”

Akbik said even without progress on Homs, the talks would move onto the substantial political talks on Monday, and that the opposition would not accept any watering down of its demand for the Geneva communique’s implementation.

“There is no possibility of reviewing Geneva 1 articles – not even one letter,” he said.

Profound mutual mistrust and the absence from Geneva of powerful Islamist opposition groups make any substantial progress very difficult, and previous aid deals and ceasefires in Syria have proved short-lived.

There are now hundreds of rebel groups across the country, including hardline Islamists and al Qaeda-linked militants. Few pay heed to the opposition in exile and the powerful Islamic Front has said negotiators who return from Geneva without having assured Assad’s downfall will be treated as traitors.