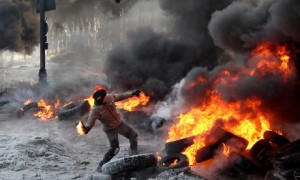 Kiev- Police clashed with protesters who blockaded a building in central Kiev on Sunday and the fate of Ukraine’s government was uncertain after embattled President Viktor Yanukovich offered opposition leaders key posts.

One of the president’s main foes described his offer as a “poisoned” attempt to kill off a protest movement in a country plunged into unrest by Yanukovich’s U-turn from the European Union towards Russia.

Emboldened opposition leaders said they would press for more concessions, warning that they would not let Yanukovich call the shots, setting the stage for a tough political battle at a special session of parliament scheduled for Tuesday.

In the latest violence, a few thousand protesters tried to storm an ornate cultural centre where hundreds of security forces personnel were gathered in central Kiev, a few hundred metres from the hub of weeks of opposition protests on Independence Square.

Police and security forces later left the building, its windows shattered, and streamed out through a corridor created by the crowd after an opposition leader, Vitaly Klitschko, arrived at the scene and helped to negotiate a solution.

The two-hour pre-dawn confrontation came after Yanukovich made his biggest concession yet in a two-month standoff that has cast Ukraine into crisis, killed at least three people and deepened tension between Russia and the West.

The opposition planned to hold a prayer ceremony later on Sunday for the protesters who have been killed and carry a coffin bearing the body of one of them, Mykhailo Zhyznevsky, down Kiev’s main street before his burial.


Yanukovich abruptly abandoned plans to sign political association and free trade deals with the EU in November, pledging instead to improve ties with former Soviet master Russia and angering millions who dream of being in Europe.

Hoping to end protests that threaten to bring the country to a standstill, Yanukovich on Saturday offered former economy minister Arseny Yatsenyuk the post of prime minister.

The presidency linked its offer to the opposition reining in violent protesters. Though the protest movement is largely peaceful, a hard core of radicals have been fighting pitched battles with police away from Independence Square.

Opposition leaders, whose power base is among protesters massing in the square named after the independence Ukraine gained in the 1991 Soviet break-up, said they would press their calls for early elections and repeal of an anti-protest law.

“We are ready to take on this responsibility and take the country into the European Union,” Yatsenyuk was quoted as telling crowds on Independence Square after emerging from talks with Yanukovich. But he added that this would entail the freeing of former prime minister Yulia Tymoshenko, who was jailed in 2011.

Klitschko told German newspaper Bild am Sonntag: “This was a poisoned offer by Yanukovich to divide our protest movement. We will keep on negotiating and continue to demand early elections. The protest by Ukrainians against the corrupt president must not have been in vain.”

Opposition leaders say Yanukovich has betrayed Ukraine and are calling for an election long before the next one is due in spring 2015. Klitschko said it must be held this year.

The United States has warned Yanukovich that failure to ease the standoff could have “consequences” for its relationship with Ukraine. Germany, France and other Western governments have also urged him to talk to the opposition.

Pope Francis called on Sunday for an end to the violence and for all the parties to engage in “constructive dialogue”.

Russia on Saturday stepped up its warnings against international interference in Ukraine, telling European Union officials to prevent outside meddling and cautioning the United States against inflammatory statements.

Photo: A pro-European integration protester burn tires at the site of clashes with riot police in Kiev.