Russia’s Ruble at four-year low against the US dollar 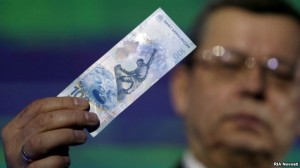 MOSCOW — The city’s middle class has been seized by a collective anxiety attack. All it takes to set the heart pounding is a walk down the street, where red-pulsing­ electronic signs remind everyone that the ruble is falling.

The signs, advertising the exchange rate between the ruble, the dollar and the euro, show that last week the ruble was as slippery as the January sidewalks, reaching a four-year low against the dollar. The news dominated the talk on Ekho Moskvy, the favored radio station of the middle class.

A weakening ruble means that food, clothes, mobile phones, pots and pans, and everything else made abroad — products many Russians and especially the middle class rely on — are becoming more expensive. So is travel out of the country, an emotional escape valve for those who feel their lives are circumscribed in Vladimir Putin’s Russia.

After hours of fielding fretful questions from listeners, Ekho Moskvy’s chief editor got the minister of finance on the air Thursday night and thrust a wad of questions on him. “What is happening?” Alexei Venediktov asked. “The ruble is so weak. Does it mean it has collapsed already? Our listeners are worrying. The dollar has hit 34 rubles for the first time since 2009. Is something wrong?”

The minister, Anton Siluanov, tried to soothe. “There is no problem,” he said. “The idea is to make the ruble flexible, not to artificially support it as we did in the past.”

On Friday, the ruble got so flexible it hit another record low, this time with the euro.

“I’m worried,” said Oksana Shipko, 45, a wife and mother of two who was out shopping Friday. “The economy is not developing. Food prices are high, and they’re going to get worse.”

Since the beginning of the year, Siluanov said, the ruble has lost 3.6 percent of its value. As often happens here, he blamed it on the United States but not in a mean way. He pointed out that other emerging markets have been hit as well by global turmoil and that the ruble has had its ups and downs before.

“Last year, the U.S. said that they would decrease the so-called quantitative easing,” he told Venediktov. “In other words, they would stop printing money. And this is absolutely right since the economy there is developing and the unemployment rate is going down. So many investors think, ‘Okay, the U.S. will stop printing money so I better take my money from the developing markets and put it in more reliable assets.’ ”

The withdrawal of investment, which weakens the ruble, and an economic slowdown intersect with the change in the Russian Central Bank policy. The Central Bank has been setting a target range for the ruble and intervening to keep it there, spending dollars to buy rubles if the currency is weakening.

Now the bank is gradually withdrawing that support, aiming to allow the ruble to float — its value determined by the market — by next year. The ruble could be even lower by then.

Many Russians refuse to worry. They’ve lived through worse.

“Prices are growing,” said Margarita Rotanova, a university professor. “It goes without saying. But you are young. I lived through the war. Nothing is surprising now. Look who’s in charge.”

She keeps working. That is the way to deal with rising prices. On Sunday, she turns 79.

Vladimir Kotov couldn’t help but notice high prices as he packed up his modest shopping bag at his neighborhood grocery store Friday.

“What can you do?” asked Kotov. He has stayed on at work as a designer for the Moscow subway so he can help other family members keep up their spending power. He celebrates his 82nd birthday Feb. 3.

Despite the angst, the Central Bank is doing the right thing by withdrawing support from the ruble, said Evsey Gurvich, head of the Economic Expert Group in Moscow.

Previous financial crises demonstrated the Central Bank was unable to properly manage interest rates when it was managing the exchange rate, he said in an interview.

A weaker ruble can have positive effects along with the negative, he said. Although Russia becomes less attractive for the foreign investment it craves, domestic industries become more competitive, possibly giving them a boost. The economy could use one: Russians got used to growth of around 8 percent a year in the previous decade. Last year, it slowed down to 1.5 percent.

Laziz Pardabayev, a 23-year-old salesman with a mobile phone company, had heard the theory that the weaker ruble could give domestic manufacturing the break it needed to grow and help the economy develop.

He smiled at the thought.

“I don’t think it will help,” he said. “You know how things are in Russia.”

Still, he hardly intends to panic about the ruble or the economy.

“What will I do?” he said. “I hope one day I will move from this country.”

Photo: The new 100-ruble banknote with the 2014 Olympic theme being introduced in St. Petersburg recently. The dollar has hit 34 rubles for the first time since 2009. The Central bank is gradually withdrawing its support, aiming to allow the ruble to float, as a result of this it could fall further