Syria rivals met but didn’t speak to each other 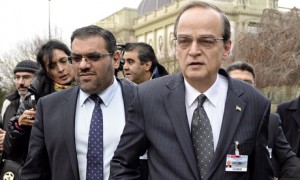 Syrian peace talks got off to a tentative start, with the leaders of the rival delegations failing to attend the first face-to-face meeting and those present refusing to speak to each other directly.

Delegates for the Syrian government and the opposition Syrian National Coalition (SNC) met face-to-face for the first time in the meeting on Saturday at the UN’s office in Geneva.

Nor did those in the same room talk to each other directly. Instead, the meeting was mediated by the UN-Arab League special envoy to Syria, Lakhdar Brahimi, who passed messages between the two groups.

During the meeting, which lasted less than an hour, Brahimi said he was trying to find a common ground between the two sides. He made clear to both sides that the negotiations were about implementing the terms of the Geneva communique – such as the establishment of a transitional government.

After the meeting, Anas al-Abdeh of the SNC was the only one who spoke.

“It was a u-shaped table, [and we were] sitting opposite each other. Brahimi was sitting in the middle. He was the only one who spoke. He spoke for half an hour,” Abdeh said. “He spoke about the need to implement the Geneva communique and about the need to alleviate the suffering of the Syrian people.”

“It was hard to sit in front of regime representatives, but we are doing it for the sake of the Syrian people,” he said.

On Saturday, before the talk had started, Syrian Information Minister Omran al-Zoubi insisted that Assad government did not accept the formation of a transitional body, and that the government delegation were going to the talks to discuss the terminology of the communique.

“Syria is a state with a functioning state institution,” he told reporters, adding there was no need to form any governing body to replace the existing government.

Zoubi was also absent from the first meeting as was Assad’s media adviser, Bouthaina Shaaban.

In the absence of Muallem and Jarba, Syria’s UN envoy Bashar al-Jaafari led the government delegation, while Hadi al-Bahra led the opposition delegation.

A second meeting is expected to start later on Saturday, with both sides sitting in the same room once more. The opposition is expected to propose a ceasefire in Homs, effective from Sunday.

Despite the stumbling blocks, direct negotiations are seen by many diplomats as the best hope for an eventual end to the war.

Brahimi spent two days meeting the rival groups separately, and late on Friday, said: “I think the two parties understand what is at stake. Their country is in very, very bad shape. And I think that the people who are here representing the opposition and the government understand that as well as I do, or better. It is their country after all.

“So the huge ambition of this process is to save Syria. No less than that.”

The opposition, which agreed to the peace talks only under intense diplomatic pressure, had been reluctant to sit face-to-face with a government it insists must yield power.

But the government says it is there only to talk about fighting terrorism – the word it uses for its enemies – and that no one can force Assad to go.

Protesters in several Syrian towns demonstrated against the talks, saying Assad had shown with years of military strikes against his people that he favoured violence over negotiations.

But the two sides’ willingness to meet Brahimi – even separately – gave some hope that negotiations might bear fruit. Brahimi himself has said both sides may bend on humanitarian corridors, prisoner exchanges and local ceasefires.