Rouhani on CNN : This is what we mean by death to America 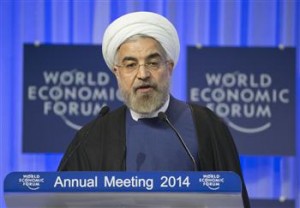 During an interview by CNN’s Fareed Zakaria with Iranian President Hassan Rouhani to discuss the nuclear negotiations, relations with the United States, whether he believes an Israeli military strike is likely, and what he thinks should happen next in Syria, He said:

“Well, the people, when they say ‘Death to America!’ – do you know what they are really saying? What they mean to say relates to the aggressive policies of the U.S. and intervention and meddling by the U.S.,” Rouhani says. “We don’t want those to continue. We want people to decide for themselves.”

“All countries in my part of the world, we want democracy to prevail. I told the people, if you want American policies to stop, we need to take action. We need to make the US Understand that its meddling is inappropriate.”