Immigration to Israel slowing, except from France 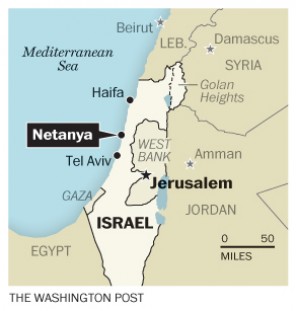 NETANYA, Israel — This sunny city on the Mediterranean has become known among Israelis as the French Riviera, both as a compliment and a dig.

As immigration to Israel has dipped over the past 10 years, France is the only country seeing a growing number of its Jewish citizens move there. And Netanya is the French arrivals’ No. 1 destination.

The reasons the French newcomers give for moving here: They love Israel, or at least the idea of Israel; the economy in France is weak, especially for young people; and perhaps most important, they say they feel a rise in anti-Semitism in France, from the subtle forms — promotions passed over, party invitations that never arrive — to the most overt.

“We come from Toulouse, so you can understand why we came here,” said Laurent Mardoukh, a middle-aged building contractor who arrived in Netanya with his wife and three boys last year.

Mardoukh’s eldest son was attending the Ozar Hatorah school in Toulouse on March 19, 2012, when a French national of Algerian heritage named Mohammed Merah shot to death a rabbi and three students.

“Now I prefer to live in peace and quiet in Israel, surrounded by all the craziness of the region, than in France, which is not as quiet as it seems,” Mardoukh said.

Immigration to Israel is called making “aliyah,” which in Hebrew means “the act of going up” or “ascending.” And it is slowing, despite intensive, expensive outreach — and outright wooing — by the government and private organizations. About 19,200 Jews immigrated to Israel last year, down a bit from the 22,139 who came a decade ago.

Against that backdrop, France is the exception. There were 3,270 French arrivals last year, an increase of 63 percent from 2012, according to Israel’s Ministry of Immigrant Absorption. Percentage-wise, that is a far greater number than the 3,070 Jews who emigrated from the United States, which has many more Jews than France. The French consul here has said that as many as 150,000 French nationals may now be living in Israel.

“From other countries, the number of people making aliyah is going down — in Britain and the United States; but among French Jews, there are many coming here,” said Yoni Chetboun, a member of the Israeli Knesset, or parliament, and chairman of the newly created Knesset lobby for French immigrants and French speakers in Israel.

Natan Sharansky, the former Soviet dissident who is now chairman of the Jewish Agency, a semi-governmental organization that promotes aliyah in Jewish communities worldwide, said he has felt for several years that emigration from France was about to take off.

“I attended our aliyah fair in Paris and there were 5,000 Jews there asking questions,” Sharansky said.

Israel is a country built by immigration, and it is a core national mission to populate the country with as many Jews as possible.

There are religious, moral and practical reasons for this. Known as the Jewish state, Israel is 75 percent Jewish; most of the rest of the population is Muslim, with a smaller number of Christians, Druze and other minorities. Some Israelis fear what they call a “demographic time bomb” that would see the Arab Muslim population in Israel grow steeply in proportion to the Jewish population.

Sharansky warned: “To those who say that anti-Semitism in France is good for Zionism, I say they are wrong. For every 10 who experience anti-Semitism, nine will distance themselves from Jewish life, and only one will make aliyah.”

He pointed out that in decades past, Jews came to Israel fleeing persecution and pogroms, but today they make a choice to move from their home countries. They have more options than just Israel, so there is competition, especially for highly skilled workers.

David Merran was living a nice life in Paris, working as an investment counselor in a bank. But four months ago, he brought his wife and three young children to live in Israel. He said they were drawn to Netanya because his parents had bought an apartment here and his wife loves the sea.

“And everyone speaks French, so it is very easy,” he said. So easy, he said, that he has to make an effort to speak Hebrew. Jews making aliyah to Israel spend five months in government-sponsored language academies.

Some Israelis stereotype the French immigrants as snobs.

“There is a stigma that all French Jews are rich and are buying up penthouses by the sea,” said Dali Eli, a director in the Ministry of Immigrant Absorption who works in Netanya. “That might have been true in the past, but today the new immigrant is from the middle classes. They do not have a lot of money. They need to learn Hebrew and get a job as quickly as possible.”

Merran said his family had always dreamed of living in Israel. But there were other reasons for leaving Paris. Merran, who wears a skullcap, said he was accosted on the subway by French Arabs. His sister was cursed with an anti-Semitic slur on a public street. The fact that he wanted to be home on Friday afternoons for the Jewish Sabbath was frowned upon at the bank.

“It is not only the Arabs,” said Merran. “It is society in France. Just below the surface, it is there.”

Israelis have been watching closely the debate in France over whether to ban performances by the comedian DieudonnéM’bala M’bala. Dieudonné, as he is known, has popularized an arm gesture that many describe as a reverse Nazi salute, called the “quenelle.” Dieudonnésays it is simply an anti-establishment gesture; the French interior minister has branded him a racist, anti-Semitic Holocaust denier.

Merran said he prefers to focus on the future.

“Every moment we are here, I feel lucky,” he said.

Newcomers like Merran are given the concierge treatment by the Israeli government. He has a dedicated case worker who helped him with his résuméand enrolled him in language school. He has received tips on where to shop, the mechanics of paying the bills, the best schools and the names of doctors and dentists who speak French.

“There is also a snowball effect. People come and they are sharing their stories and experiences with people back in France, and that is making more people want to come and try it out here,” said Avi Zana, director general of a group called AMI, which encourages aliyah from France.

But Zana said the Israeli government must do more to make it easier for the French to come, by accepting French professional licenses and diplomas for use in Israel. The government has pledged to do this.

“This is an incredible window of opportunity to bring the French Jews to Israel,” said the minister of immigrant absorption, Sofa Landver. There are about 500,000 Jews in France, the third-largest Jewish population outside of Israel and the United States.

“We need to do all we can to absorb these new immigrants and to do it right, so that they do not leave and go somewhere else,” she said.

Boxes containing pigs’ heads have been sent to the Israeli embassy in Rome and the city’s synagogue, Italian media reported Saturday.

The package mailed to the embassy in the wealthy Parioli area of the Italian capital was intercepted by police after other similar parcels were sent to the synagogue and the Jewish Museum of Rome.

The synagogue’s package was delivered Friday just as staff received an anonymous phone call claiming there was a parcel bomb on site, the reports said.

The threats come just days ahead of the International Commemoration Day in memory of the victims of the Holocaust on January 27.