From Syrian prisons to opposition spokeswoman 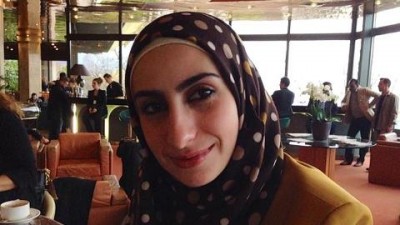 When Noura al-Ameer exchanged looks with the Syrian government representatives in Switzerland, she felt as though she was looking into the eyes of her interrogators in prison.

The 26-year old anti-government activist was detained for six months in some of Syria’s most notorious prisons in Damascus and Homs before her release in late 2012.

She is now the vice-president of the opposition delegation trying to negotiate a peace deal with representatives of President Bashar al-Assad’s government, whose forces arrested her at a bus station in the Syrian capital.

“When we met the regime delegation, they were staring at us. I looked back at them with complete contempt,” she told Al Jazeera from the city of Montreux, where the rival delegations met face-to-face during the peace conference’s preliminary session for the first time since the conflict in Syria began three years ago.

“These people are coming here to defend the president who detained me and many of my friends,” Al-Ameer, with a colourful headscarf framing her calm face, said.

“They are here to defend the person who killed some of my friends, the youth who were supposed to build Syria,” she adds, as her voice trembles. Tears form in her eyes.

Al-Ameer was what Syrian opposition activists would call, “a revolutionary of the trenches”. She was a hands-on activist in her city, Homs. She participated in protests against Assad, coordinated opposition activities, and distributed relief aid.

She and her network of activists were arrested in May 2012. Thrown into a notorious jail run by the military intelligence, al-Ameer was then moved to the infamous Adra prison on the outskirts of Damascus, before she spending the last few months in a Homs prison.

When asked if she was tortured she waved her hand in indifference and said: “Only with electricity and cables. I don’t think it’s appropriate to talk about my torture because it is nothing compared to what my other female detainees are now enduring.

“Since my release, the regime has really stepped up torture in prisons; [it] began using creative methods against detainees, especially women.”

She left to Turkey and continued her activism near the Syrian border after being freed.

As the Syrian National Coalition, the main opposition bloc, expanded its membership, al-Ameer joined the Western-backed group in May 2013. The young woman is a fresh face in a Coalition dominated by men in their 40s and 50s. Unlike the imprisoned revolutionary, many of the men in Geneva have little experience in on-the-ground activism.

It was an unusual move for a “revolutionary of the trenches” to join the Coalition, which is accused of being detached from struggles on the ground. Many rebels and activists perceive the SNC as a tool for the West and its regional allies. Members of the bloc are often dubbed “hotel revolutionaries” as they frequently attend lavish conferences in luxury 5-star resorts. It’s a striking contrast to the misery faced by average Syrians.

“I was sick of this negativity, of people criticising the Coalition instead of fixing it,” she said, sitting at the piano bar of Royal Plaza hotel on the shores of Lake Geneva. “So I decided to join it, because our revolution should be represented everywhere. I also want the face of the revolutionary women to be represented.”

The Syrian National Coalition is also accused of inefficiency and many groups on the ground rejected its authority as a “representative of the revolution”.

“The revolutionary work is fast paced. It is the gate to achieving the impossible. Political work, however, is a slow process and it only moves within the sphere of the possible,” al-Ameer said. “This is why so many activists on the ground are frustrated with the Coalition. They are expecting it to move as fast as they do, and this is understandable.”

The selection of al-Ameer to the opposition delegation may give the negotiating team some credibility in the eyes of activists on the ground, considering her history of struggle and suffering.

The delegation is meeting government representatives in Geneva amid general sentiments of indignation from rebels and civil activists in Syria who insist that talking to Assad’s officials is “a betrayal of the blood” of those killed by the regime.

But al-Ameer hopes talks can help alleviate the suffering of people in her country.

The ongoing negotiations are based on the Geneva communiqué, which lays out a political transition plan for Syria, calls for an end to fighting, and the creation of humanitarian corridors to besieged areas.

The opposition delegation is currently pushing for aid access to besieged areas in al-Ameer’s city, Homs.

“I am not here to make peace with the regime. I am here to fight for our rights and to do something for the suffering people, to help Syria become free without the regime of Assad,” she said.

“The political battle is no less important than the military battle. And this is a battle I want to fight until the end.”