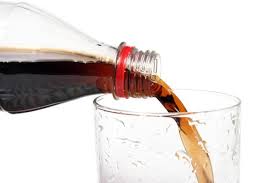 There was a warning issued Thursday about the soft drinks you and your children may be consuming every day.

The issue is with the caramel coloring in many soft drinks. It is what gives them their brown color. Some contain a possible human carcinogen.

Why is it in there? Can it be removed and what can you do to protect yourself? Here’s what you need to know:

Cola is one of the most popular soft drinks in the country, but now a study from Consumer Reports says that the caramel coloring additive that gives cola — and many other soft drinks — its brown color, can contain a harmful chemical called 4-methylimidazole, or 4-MEI.

“It was in fact … definitely causes cancer in animal studies. The International Agency for Research on Cancer has also classified 4-MEI as a possible human carcinogen,” Dr. Urvashi Rangan said.

As Dr. Gomez reported, 4-MEI is a byproduct when caramel color is manufactured, but it’s not in all caramel coloring and amounts vary widely in caramel-colored drinks, even when the same brands were tested just a few months apart.

“Coke came in at a negligible cancer level at one can of Coke. That said, we found other manufacturers — like Pepsi — really quite a lot higher than Coke,” Dr. Rangan said. “Malta Goya, which is a Hispanic soft drink, was actually at 300 or more micrograms per 12-ounce serving.”

There’s no flavor reason for the caramel coloring. It’s strictly cosmetic. So California recently required warning labels on any food or beverages containing more than 29 micrograms of 4-MEI. But there are no such federal requirements, so your only way to avoid 4-MEI is to look for caramel coloring on the label, Dr. Gomez reported.

Pepsi responded to the Consumer Reports study on Thursday, saying the average amount of diet soda consumed by people is just 100 milliliters. For that reason the company believes that Pepsi One does not require cancer-risk warning labels.

One hundred milliliters is less than a third of a can of soda. A full can does exceed the California limit.

CBS 2 contacted Goya Foods on Thursday, but it declined to comment on the Consumer Reports study.

The variability in 4-MEI levels comes from how the caramel color is manufactured and who supplies the coloring to the soft drink maker. So it’s possible to minimize the 4-MEI in caramel coloring.

By the way, drinks labeled “natural” also contained caramel coloring. So make sure to read the ingredients.