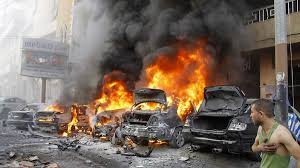 A suicide bomber killed four people on Tuesday in a residential district of southern Beirut known for its support of the powerful Shi’ite Muslim military and political movement Hezbollah, security sources said.

Tensions from Syria’s conflict have increasingly infected neighboring Lebanon. Hezbollah has sent fighters and advisers to help its ally President Bashar al-Assad, a member of the Shi’ite-derived Alawite minority, against mainly Sunni rebels.

A Reuters reporter said she saw the remains of what appeared to be the suicide attacker as emergency workers transported wounded people from the blast site, less than 100 meters from where another bomb exploded this month.

“I was passing in the street and the explosion went off,” a wounded man at a nearby hospital, Kamal Abdel Ali, said. “I don’t know how but I flew and fell to the ground.”

Flames erupted from a building and a thick plume of smoke billowed over the street near the charred remains of cars as a crowd gathered at the site of the attack.

The blast occurred on a busy street of small shops and restaurants in the Haret Hreik area of the Lebanese capital’s largely Shi’ite southern suburbs and fit the profile of previous attacks against Hezbollah targets claimed by Sunni militants.

A Twitter account purportedly run by the Lebanese branch of the Nusra Front, a Syrian rebel group with links to al Qaeda, said it carried out the attack, but it was not possible to verify the claim.

Hezbollah’s strongholds in Lebanon have been hit by a string of rocket and bomb attacks, including one in Haret Hreik on January 2 that killed at least five people.

Politicians in Lebanon, still struggling to recover from its own 1975-1990 civil war and without a fully functioning government since March, condemned Tuesday’s bombing.

“Today it is clear that we are living through the latest episode in a series of organized terrorist acts which is targeting the stability and security of the country,” caretaker Health Minister Ali Hassan Khalil told Lebanon’s Al-Jadeed television.

A STRING OF ATTACKS

Security sources told Reuters that four people had died in Tuesday’s attack and at least 20 more were wounded.

The bombing was the third to target a centre of Hezbollah support this year. The first of those came less than a week after a car bomb killed former finance minister Mohamad Chatah, a critic of Hezbollah and Assad, and six others in Beirut.

Officials from the Shi’ite movement often frame the attacks on their centers of support in Lebanon, as well as their involvement in Syria, as part of a broader struggle pitting regional and international powers against one another.

In another sign of the Syrian conflict’s spillover, fighting reignited in the northern city of Tripoli, where at least seven people have died since Saturday in fighting between factions who support different sides in Syria’s civil war.

A civilian was killed on Tuesday in clashes between the army and militants and two soldiers were wounded in the city, which is about 70 km (40 miles) north of Beirut, security and medical sources said.

Rocket fire from Syria killed at least seven people in the border town of Arsal on Friday, a day after a suicide car bomber killed three people in Hermel, a largely Shi’ite town supportive of Hezbollah also near the border with Syria.

Former Lebanese Prime Minister Saad al-Hariri told Reuters last week he was ready to share power with Hezbollah if that was what it took to help end the country’s political deadlock.

LBCI reported that alternative residences have been provided for residents that were affected affected by the Haret Hreik bombing.
Future TV reported that Nabil Ahmed al-Moussawi confessed to stealing the cars that exploded in Hermel and Haret Hreik. He also confessed that he later sold them to Maher Tleis, who in turn took them to Syria to rig them with explosives.
Lebanon’s judiciary police arrested Mousawi who hails from Beqaa in eastern Lebanon.

A patrol of the Theft Bureau followed Moussawi, exchanged fire with him in front of the Rotana Hotel in Hazmieh and finally apprehended him on Al-Sanawbara Street in Ain al-Remmeneh, according to reports

Mousawi ‘s relatives urged the state to inflict the maximum penalty on him, New TV reported on Tuesday.

More violence in Beqaa was reported on Tuesday . A rocket  reportedly fell near al-Mahdi School in the   town of al-Bazzaliyeh and the school will close tomorrow over fears that the area might be targeted with more rockets.