Gemayel calls for national conference to deal with security 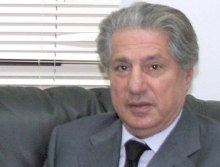 Former lebanese president and Phalange party leader Amin Gemayel called on Tuesday for holding a national conference to deal with security problems caused by Islamic extremists stressing that political stability is part of the solution.

“Initiative should be taken to hold a national conference to immunize Lebanon against these takfiri movements,” Gemayel said in a statement published by National News Agency Tuesday.

“We need [to see] a national position from all leadership, concerning security, stability and national partnership to consider the real publicly-stated reasons [behind] all these movements.”

He added that while formation of a cabinet is important the problems Lebanon is facing run deeper than current debates.

“Formation of an all-inclusive government is important, so that it can react to these crises and tragedies… [but] the national meeting I have in mind goes even further into the depth of the problem Lebanon has been facing for some time.”

His comments come after Hezbollah stronghold in Beirut’s Shiite suburb of Dahiyeh was subjected to an attack for the second time this month, when a car bomb ripped through the Haret al-Hraik neighborhood , leaving at least four people dead.

The Al Qaeda linked Al-Nusra Front claimed responsibility for the car bombing, after the National News Agency said that the car bomb was “likely” caused by a suicide bomber.

Talks have intensified in the past week on cabinet formation, as parties attempt to form a new government that would bring together the rival March 14 and March 8 alliances.