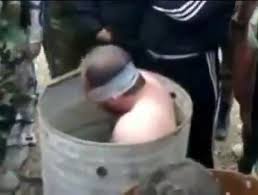 Syrians who escaped the dictatorship of Bashar Assad said Tuesday that the use of torture by the regime as documented by the release of hundreds of new photographs is commonplace.

“I was detained multiple times and tortured until my ribs and four of my fingers broke even though I was blindfolded, handcuffed and my legs were tied,” said Nayef al-Sari, 40, an activist in Daraa, Syria. “This regime tortures because it can’t handle the revolution on the ground and is trying to assert power again. It has much blood on its hands.”

On Monday, a report by three international war crimes prosecutors obtained by USA TODAY and first reported by CNN and the Guardian newspaper accused the Syrian government of the “systemic” killing of 11,000 people detained by the regime from the start of the revolution in March 2011 until last August.

The report is based on smuggled photos taken by a defector who worked with the military photographing the bodies for death certificates of regime opponents who were tortured and starved to death.

On Tuesday, the group Human Rights Watch accused the United States of solely focusing on peace talks rather than putting “real pressure” on the Assad regime to end its campaign of systematic murder and bring those responsible to account. The group also accused Russia and China of shielding their ally Syria from concrete action at the United Nations.

Peace talks overseen by the United Nations and pushed by the Obama administration are scheduled to begin Wednesday in Geneva. But Syrian opponents to Assad have not decided whether they will attend because they say the focus should be on bringing Assad to justice.

“We cannot afford to wait for the distant prospect of a peace accord before the killing of 5,000 civilians a month comes to an end,” Kenneth Roth, executive director of Human Rights Watch, said during the release of the group’s annual report in Berlin Tuesday. “The mass atrocities being committed in Syria should have equal focus to the peace process.”

The new report of atrocities by Assad’s regime is based on a review of the smuggled photos of by a team of internationally renowned war crimes prosecutors and forensic experts. The team says the photos represent “direct evidence” of “systematic torture and killing” by the Assad regime.

The report is based on photographs of thousands of dead bodies of alleged detainees killed in Syrian government custody.

“This is a smoking gun,” David Crane, one of the

report’s authors, told CNN. “Any prosecutor would like this kind of evidence — the photos and the process. This is direct evidence of the regime’s killing machine.”

Human Rights Watch says the report shows that Assad must be tried for war crimes. But some Syrian activists doubt this will ever happen. They say Assad paid no price when he gassed hundreds of families to death last year in an attack that President Obama had said warranted a military response from the West. No such response came.

“Before the revolution everyone who opposed the regime in even the smallest thought or action was arrested and tortured,” said al-Sari. “I know this bloody regime and it will not change but will escalate: Every time it loses something on the ground and gets weaker, its brutality increases.”

Photo: Syrian troops torturing men who they claim transferred arms to the rebels.