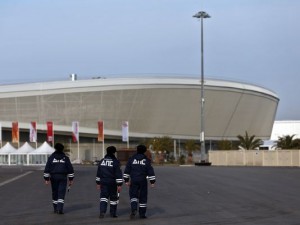 A possible female suicide bomber may have already made it past the ring of security for the Sochi Olympic Games, according to reports from ABC News and NBC News.

Russian security services may be looking for as many as four “black widows” who have been dispatched to disrupt the Olympics, NBC News reported Monday. The suspected terrorist who may be inside the security ring is believed to be a young widow of an Islamic militant killed by Russian security forces last year. She is described as being affiliated with the Caucasus Emirate, the terror group led by Doku Umarov that has threatened attacks against next month’s Winter Games in Sochi.

Wanted posters describe the woman as having a limp in her right leg, a left arm that does not bend at the elbow and a 4-inch scar on her cheek. The notices say that Russian security officials have been informed of her possible departure from Dagestan earlier this month.

Militant groups in the Caucasus are known to use “black widows,” considered by security experts to be harder to identify because they do not fit the stereotype of an Islamic militant and can easily change their appearance with clothing and makeup.

Russian authorities are primarily responsible for security at the Games, although the U.S. government provides additional security for the Olympic delegation. About 40,000 Russian police and military personnel have been dispatched to the region.

In Sochi, the Olympic Park on the coastal cluster includes venues for ice sports such as figure skating, hockey, speedskating and curling. It is surrounded by a heavy security ring, as has been the practice for past Games.

A day earlier concerns raised by members of Congress about the safety of Americans at the Sochi Olympics and the release of a video by two purported suicide bombers underscored the terror threat Russia faces as it prepares to host the Winter Games in 17 days.

An Islamic militant group in the volatile Caucasus region threatened to attack the Games and claimed responsibility Sunday for two bombings last month in the southern city of Volgograd which killed 34 people.

U.S. authorities, however, were analyzing the group’s video posted on an extremist website, and it was immediately unclear whether the boasts of the two unidentified men represented a credible threat to the Games, a federal law enforcement official said.

The official, who is familiar with the video but not authorized to comment publicly, said there was no definitive evidence to indicate whether the two men pictured in the video were linked to the Volgograd bombings.

Rep. Michael McCaul (Texas-R) said he planned to be in Sochi today to assess the situation. “All the briefings that I’ve received, from the intelligence community to the FBI and others, indicate that there are serious concerns, and that we need to do a lot to step up security. I do believe (Vladimir) Putin is doing a lot of that,” said McCaul, chairman of the House Homeland Security Committee, on ABC’s This Week.

Others called for more cooperation from Moscow on security issues while raising concerns for Americans going to Sochi. “I would not go, and I don’t think I would send my family,” Sen. Angus King (Maine-independent) told CNN.

The State Department has advised Americans attending the Games to keep vigilant about security because of potential terrorist threats and crime.

Last week Chechen leader Ramzan Kadyrov said Umarov, who made threats against the Games, has died. He had no proof of Umarov’s death but said the information was obtained through communications between other rebel leaders.

U.S.Olympic Committee spokesman Patrick Sandusky reiterated Sunday that the USOC works closely with the State Department to ensure athletes’ safety, which is the general practice for every Games.

In the aftermath of the bombings, some American athletes said they had full confidence in the host country’s security measures. “Putin is not going to compromise security. This is his baby,” speedskater Patrick Meek said.

US Today
Photo: Security personnel walk in the Olympic Park in the Coastal Cluster on Jan. 9 in Adler, Russia.(Photo: Michael Heiman, Getty Images)