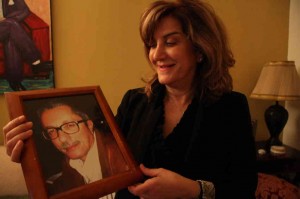 Tributes have been pouring in from journalists, NGO (non-government organizations)and workers for the Lebanese restaurateur Kemal Hamadeh, who along with 20 others died in a suicide attack on his Kabul restaurant, Taverna du Liban.

Charming, generous, hardworking and courageous (he was gunned down defending his mostly foreign customers), Mr Hamadeh was the classic Lebanese expatriate entrepreneur, one of that hardy breed that can sniff out an opportunity where no one else would put their nose and turn a half-chance into a success story.

Who else, other than a people of a nation weaned on emigration, war and instability would open a business that, judging by the photographs looked more like Fort Apache than a popular restaurant, in one of the most dangerous cities on Earth and apply both hard work and charisma to make it thrive as a refuge for a tight-knit foreign community. And it had to be restaurant, a business that combines our love for making money with a chronic addiction for conviviality.

The French have a word for the conditions in which crops, especially vines, grow. Terroir doesn’t just describe the soil, the terrain and the climate, it also suggests what cannot be defined, the quality that makes one piece of land produce something remarkable that an adjacent plot cannot. With good and plentiful food, the personal touch and a gun behind the counter, Mr Hamadeh was a product of the best business terroir on Earth.

In the early 20th century, my grandfather founded companies in Brazil and Mali with only a suitcase and mosquito net. He was not alone. Emigrés left by the boatload, many not knowing where they were going and others expecting to get to South America and ending up in Africa. But destinations didn’t really matter. What was important was the opportunity to roll up their shirtsleeves and get to work.

In 1989, I found myself driving through the jungle on the impoverished Caribbean island of Dominica. As we entered a clearing we saw a small white, wooden house, the first building we had encountered for about 30 minutes. On the front bore the legend Cedar Trading, Liban.

And if you ever find yourself in Oshikango, a tiny outpost on the Namibian/Angolan border, look up my friend Ayman Hijazi, a man from the village of Haris in south Lebanon who runs a trading company that has Nokia, Samsung and Nissan concessions. Why Oshikango? “Angola is booming and we are doing well,” he told me last month. To get there from Beirut he has to take four flights. “You get used to it,” he shrugged.

Back in Lebanon, the conditions that historically forced its people to leave show no sign of abating. On the same day as the Kabul attack I was having lunch with the owner of a small advertising agency. She admitted that business was “slow” and that one of the her major clients whose company is based in the increasingly unstable Bekaa Valley, had decided not to advertise this year, not because it didn’t have the budgets – on the contrary, exports were doing well – but because he felt that a presence on the billboards would suggest money and that would make him a target for kidnappers.

“We don’t need a government,” she said. “They have never done anything to promote the economy anyway and we don’t even really need a functioning civil service. Just give us security so we can work.” Her message is clear: We know there will never be any road map for prosperity; we just want a level playing field to do what we do best and leave the rest to us.

I can’t remember which politician or general called the British soldiers of the First World War “lions led by donkeys”. It doesn’t really matter who said it; the phrase could equally be applied to the Lebanese business class and our politicians.

By: Michael Karam a freelance writer based in Beirut

Originally published in The Nation

Photo: Nabila Hamade says, before his death Friday, her husband Kamal had begun talking about leaving Afghanistan and opening a restaurant in Beirut.