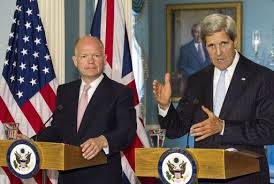 The United States and Britain welcomed on Saturday the decision by Syria’s opposition leaders to attend an international conference that aims to bring an end to the war there.

US Secretary of State John Kerry praised a decision which he called ” a courageous vote”:
“This is a courageous vote in the interests of all the Syrian people who have suffered so horribly under the brutality of the Bashar al- Assad regime and a civil war without end,” Kerry said in a statement

He predicted that the decision to attend next week’s Geneva II gathering ” will be a path that will ultimately lead to a better future for all Syrians.”

“I welcome the decision by the National Coalition to participate in the Geneva II talks,” Hague said in a statement.

“All who share their vision of a democratic and pluralist Syria need to join together in support.”

He added : “The National Coalition reached this difficult decision against the backdrop of continued brutal regime attacks on Syrian civilians, and the deliberate blocking of humanitarian aid.”

Hague repeated that any deal agreed to end the conflict would require the removal of President Assad from power.

“The UN Secretary General has made clear that the aim of the talks is to agree a political transition and an end to the conflict,” the foreign secretary said.

The Geneva II conference aims to find a way out of almost three years of brutal conflict that has claimed the lives of 130,000 people and forced millions from their homes.

More than 35 countries will gather in the Swiss cities of Montreux and Geneva starting Wednesday for talks on setting up a transitional government to lead the country, in line with a 2012 deal. 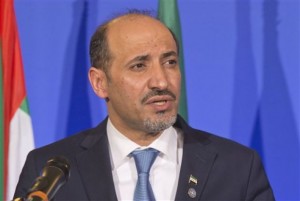 Syria’s opposition chief Ahmad Jarba said on Saturday that his opposition group has agreed to attend an international peace conference only to secure the removal of President Bashar al-Assad from power.

Kerry in his statement promised Washington’s continued backing of the opposition in the high stakes talks.

“The United States will continue to support the Syrian opposition as they embark on the best opportunity to achieve a negotiated political transition as outlined in the Geneva communique, including the establishment, based on mutual consent, of a transitional governing body exercising full executive authority, including over military and security entities,” he said.

The top US diplomat added that Washington will push to bring to an end the worst abuses of the Assad regime, including its use of “SCUD missiles, barrel bombs, and horrific weapons used against civilians.”

The United States, he said, also will press next week for “improved humanitarian access, prisoner releases, and the return of journalists and aid workers held hostage.”

Kerry added: “We all know that the process ahead will be difficult, but I say directly to the Syrian people: we will stand by you every mile of the journey as you seek to achieve the freedom and dignity that all Syrians deserve.”

Media reports suggested the United States and Britain had threatened to withdraw support from the opposition if it failed to send a delegation to Geneva II talks.

Damascus has already said it will attend, although US Secretary of State John Kerry warned the regime it could not divert the talks away from the aim of installing a new government. 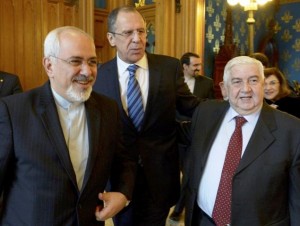 The Foreign Ministers of Russia, Iran and Syria held an unprecedented trilateral meeting in Moscow on Thursday to fine-tune their positions ahead of Syria peace talks next week.

“The three Ministers discussed “the situation in Syria and around it in the context of preparations for the Geneva-2 international conference opening on January 22,” the Russian Foreign Ministry said in a statement.

The meeting appeared to confirm the West’s long-standing suspicions of an emerging Russia-Syria-Iran axis, even as Foreign Minister Lavrov denied the three countries had any secret plan.

Lavrov said the three countries shared “common positions” on the Syrian crisis, but denied they had any “hidden agenda” or a “trilateral project.”

At his talks with Iranian Foreign Minister Javad Zarif Lavrov vowed to push for Iran’s participation in Geneva-2.

Both Iran and Russia back the Assad regime. While Russia has been Assad’s primary arms supplier , Iran has been supplying advisors, Revolutionary Guards fighters as well as Hezbollah fighters from Lebanon and Iraq to help the regime against the mostly Sunni rebels.