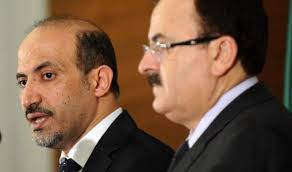 Syria’s main opposition chief Ahmad Jarba has said his Syrian National Coalition (SNC) group has agreed to attend an international peace conference only to secure the removal of President Bashar al-Assad from power.

“The Geneva II negotiation table is a one-way road aimed at achieving all the demands of the revolution… And first and foremost stripping the butcher (Assad) of all his powers,” Jarba said in Istanbul yesterday after his SNC group voted to attend Wednesday’s peace conference in Switzerland.

Jarba stressed that the talks would be “a turning point” in the war to topple Assad and his regime.

He accused Assad and his government of “state terrorism” and said the regime was responsible for the presence in Syria of Al-Qaeda-linked fighters like the Islamic State of Iraq and the Levant.

Jarba also stressed that taking part in the conference does not mean the opposition and its armed wing, the Free Syrian Army (FSA) , will stop military operations against Assad’s forces.

“We will carry olive branches and weapons until victory,” he said and called the deadly violence in Syria that has claimed more than 130,000 lives since March 2011 “the massacre of the century”.

According to SNC officials the group will form a delegation within 24 hours and will be made up of diplomats, politicians, representatives of the Free Syrian Army and legal experts.

Free Syrian Army chief of staff, General Selim Idriss, called on yesterday for a “peaceful resolution” of the war in Syria and urged opposition leaders attending the peace conference to work for the removal of Assad from power. “We urge the brothers who will go to Geneva II to adhere to the goals of the revolution,” he said in a video posted on the Internet. He said these goals were “the removal of the criminal Assad and his cronies from power, so that they have no role left in Syria in the future”, along with all army and security officers implicated in the killing of Syrian civilians.

The United States and Britain welcomed on Saturday the decision by Syria’s opposition leaders to attend the international conference that aims to bring an end to the war there. US Secretary of State John Kerry praised a decision which he called ” a courageous vote”, while British Foreign Secretary William Hague welcomed the vote by Syria’s opposition which he called “ a difficult” decision.

“This is a courageous vote in the interests of all the Syrian people who have suffered so horribly under the brutality of the Bashar al- Assad regime and a civil war without end,” Kerry said in a statement.
British Foreign Secretary William Hague reiterated that any deal agreed to end the conflict would require the removal of President Assad from power.

“The UN Secretary General has made clear that the aim of the talks is to agree a political transition and an end to the conflict,” the British foreign secretary said.