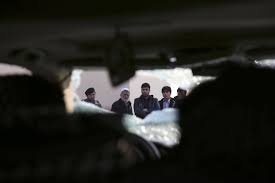 KABUL—Shock spread through Kabul’s close-knit expatriate community after the Taliban killed 21 people, including the International Monetary Fund’s mission chief and a senior United Nations official, in a dinnertime attack on a popular restaurant Friday.

With at least 13 foreigners—including at least two Americans—among the victims, this was the deadliest attack targeting foreign civilians in Kabul since the war began in 2001. Almost everyone among the diplomats, aid workers and journalists based in Afghanistan personally knew at least some of the people who died in the assault on Taverne du Liban.

The attack was prompting many foreigners to reconsider their decision to live in the Afghan capital. “It’s shocking. Myself, I will personally not go to any restaurant at all,” one foreign humanitarian worker said Saturday. Many international organizations in Kabul placed their personnel on lockdown or imposed movement restrictions following the attack.

The attack targeting foreign civilians in Kabul was likely to accelerate an exodus of expatriates, already under way as international aid shrinks and U.S.-led coalition forces prepare to withdraw from the country by December.

Many foreigners in Kabul were particularly enraged by the fact that Afghan President Hamid Karzai, who frequently issues statements to criticize U.S. airstrikes, took some 20 hours to come up with a condemnation of the restaurant attack.

“It looks like when Afghans are killed by foreigners, the condemnation is very speedy. But when it is the other way around, it’s not. These were civilians, they were not the military,” said Kate Clark, a researcher with the Afghanistan Analysts Network in Kabul.

Even in his Saturday statement sympathizing with the victims of the restaurant killings, Mr. Karzai used the occasion to censure the U.S. and its allies, urging them to “distinguish between terrorists and victims” and saying that they have pursued a policy that had no achievements in the past decade.

Mr. Karzai’s relations with the U.S. soured in recent months over his refusal to sign a security agreement that would allow some American forces to remain after this year, and his recent moves to free Taliban insurgent suspects despite American objections.

At the funeral for two Afghan victims of the attack, a newlywed couple that was dining at the Lebanese restaurant Friday, relative Mohammad Zakir said he was angry with the releases. “The prisoners who are freed go back to the Taliban, continue as before, conducting suicide bombings and killing people,” he said at the Saturday funeral outside Kabul’s Eid-Gah mosque.

Daoud Sultanzoy, a former lawmaker and TV talk-show host who’s a candidate to succeed Mr. Karzai as president in the April elections, called on the West to remain committed to Afghanistan despite Friday’s massacre.

“I urge the international community to realize the reason for their presence in Afghanistan. They came to this country because of such atrocious acts, and these acts should not be a reason for their exodus,” Mr. Sultanzoy said. “The weaker the resolve of our government and the international community, the more aggressive is the posture of the Taliban.”

The Lebanese restaurant targeted Friday was in Kabul’s Wazir Akbar Khan central district, home to many embassies, aid organizations and guesthouses. At about 7:30 p.m. Friday, a Taliban suicide bomber blew himself up at the compound’s gate, officials said. Then two other insurgents burst in and gunned down the diners at their tables.

On Saturday morning, Afghan and international investigators began scouring the site for body parts and evidence. Several shrapnel-riddled SUVs used by the foreign officials who perished in the attack were still parked outside. The restaurant’s sign, decorated with a Lebanese flag, remained above the blown-up gate.

The restaurant’s Lebanese owner was among the dead. Established several years ago, Taverne du Liban offered kebabs, fattoush and hummus to foreign—and Afghan—guests. It discreetly served wine to non-Muslims in teapots, and was famous for dishing out large complimentary helpings of chocolate cake with the check.

The Taliban claimed responsibility for the attack, saying in an English-language statement that they targeted “a restaurant frequented by high-ranking foreigners where the invaders used to dine with booze and liquor in the plenty.” The Taliban called the attack retaliation for an American airstrike Tuesday in Parwan province—north of Kabul—that targeted insurgents and resulted in civilian casualties. Mr. Karzai strongly condemned that airstrike.

The dead at Taverne du Liban included Vadim Nazarov, a senior U.N. political officer who spoke fluent Farsi and who—a rarity among Kabul’s expats—drove himself around the Afghan capital. A soft-spoken Russian, Mr. Nazarov worked to open a reconciliation dialogue with the Taliban. Instead, he ended up their victim.

In all, four U.N. staff perished in the restaurant. “Such targeted attacks against civilians are completely unacceptable and are in flagrant breach of international humanitarian law. They must stop immediately,” the U.N. said.

The IMF, a U.N. affiliate that plays a crucial role in funding the Afghan government and supporting the country’s economy, said it lost its mission head in Afghanistan, Wabel Abdallah, a 60-year-old Lebanese.

“This is tragic news, and we at the fund are all devastated,” said the lending organization’s managing director, Christine Lagarde.

A Danish member of the European Union police mission in Afghanistan and a British citizen who was part of his security team were also among those killed at Taverne du Liban, the EU said. Canada said it lost two citizens in the attack, and Britain said another British national was among the dead.

The U.S. said at least two private American citizens were among the fatalities. No embassy personnel were hurt. The American University of Afghanistan said that two of its employees, a member of the political-science faculty and a member of the student-affairs staff, were killed in the restaurant attack.

Afghans who died in the Taliban raid included a couple who came to the Lebanese restaurant for a celebratory dinner, and a driver for an Afghan phone company who was waiting outside.

Photo: Afghan civilians look at a damaged vehicle after Friday’s suicide attack of a Lebanese restaurant in Kabul . A spokesman for the Taliban, Zabiullah Mujahid, asserted responsibility for the attack.