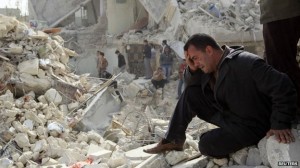 Syrian government warplanes launched raids on Saturday on the northern city of Aleppo and the surrounding countryside, killing 16 people, the Syrian Observatory for Human Rights said.

The two areas are controlled by opposition fighters who have been battling forces loyal to the government of President Bashar al-Assad since they launched a major offensive in the city in the summer of 2012.

Warplanes also hit the Sakhur neighborhood on Saturday morning, killing another five people, said the Britain-bases Observatory which relies on a network of activists on the ground for its reports.

The Observatory also said “helicopters dropped explosive-packed barrels on Al-Bab town [east of Aleppo] that led to the death of five fighters from the [jihadist] Islamic State of Iraq and al-Sham [ISIS] and another man, leaving an unknown number of people wounded.

Helicopters also launched raids with “barrel bombs” on other areas of the northern city, once Syria’s commercial capital, and two villages in the south of Aleppo province, said the Observatory without giving further details on casualties.

In December, regime warplanes launched a series of raids with the powerful barrel bombs in Aleppo province, killing more than 500 people in nearly two weeks.

Elsewhere in the country, government jets pounded two areas east of the capital Damascus in eight raids, the Observatory reported, without saying whether there had been any casualties in the attacks.

Meanwhile, the Observatory said that clashes raged between ISIS and rival rebel groups in Aleppo province on Saturday.

Fighters from groups battling the jihadist ISIS seized a village in the province, but lost ground to the other rebels in the town of Manbaj, according to the Observatory.

Nine members of one rebel group taking part in the battle against ISIS were killed early on Saturday, the Observatory reported, when a car bomb went off at a checkpoint they were manning in rural Aleppo.