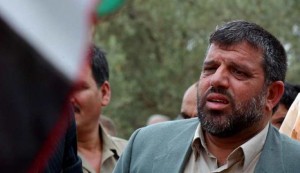 Israel released a prominent leader from Islamist movement Hamas on Sunday after he spent more than two years in prison, Palestinian officials said.

Hassan Yousef, who is also a member of the Ramallah-based Palestinian Legislative Council, told reporters after his release he would work with Hamas rivals “Fatah and other Palestinian factions to achieve reconciliation.”

Dozens of Hamas supporters received Yousef at Beituniya, near Ofer prison. Yousef had been arrested in November 2011 for belonging to an illegal organisation.

Longtime tensions between Hamas and Fatah boiled over in a week of fighting in 2007 that left the Islamist movement in control of Gaza and effectively divided the Palestinian territories in two.

The two sides have made repeated attempts to heal the rift, including an Egyptian-brokered deal in 2011 in which they agreed to make way for an interim government of independents to organise fresh elections throughout the territories.

The agreement has never been implemented.

Yousef, one of the founders of the Islamist movement, made headlines after his son Mossab said he had spied for Israel between 1997 and 2007.

Mossab relocated to the US, changed his name to Joseph and converted to Christianity.

Yousef disowned his son in a letter sent during a previous term in an Israeli prison.