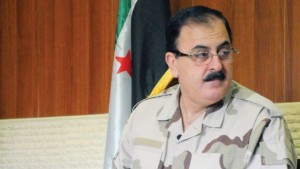 Beirut, Lebanon—In exclusive comments to Asharq Al-Awsat, Free Syrian Army (FSA) chief Gen. Salim Idris played down hopes of the Syrian rebels unifying their ranks in the near future, dismissing the formation of a Free National Army as a “pipe dream” and confirming that the battle against the Islamic State of Iraq and Syria (ISIS) will not end soon.

Idris spoke about the Islamic Front, a moderate Islamist rebel coalition recently announced in Syria, confirming that any issues between the FSA and the Front have been resolved and the two are working together to combat Al-Qaeda’s growing presence in Syria.

Asharq Al-Awsat: What role is the Free Syrian Army’s Supreme Military Council playing in the formation of the Free National Army that was recently announced by Syrian interim Defense Minister Asaad Mustafa, which aims to unify the ranks of Syria’s rebels?

Salim Idris: We have agreed with the interim defense minister to reconstruct the Supreme Military Council and reorganize the ranks of the [rebel] forces fighting on the ground in order to strengthen them in their fight against the Assad regime’s forces. However, the Free National Army issue appears to be more of a pipe dream than reality. Before making promises, we have to ask ourselves if we have the potential to form such an army, whether in terms of providing the troops ammunition or paying their salaries. I think any project that lacks these elements of success must be carefully studied, because the Syrian people have grown tired of illusory promises. The sole condition for the formation of an army such as this is the availability of sufficient funds for six months, and this is not the case.

Q: Will the Syrian Revolutionary Front—as its leader, Jamal Maarouf, has announced—form the primary core of the Free National Army when it is formed?

No one has the right to play a unilateral role, because the reconstruction of the Free Syrian Army’s Supreme Military Council must happen in a collective manner. Moreover, posts are temporary and their function is to oversee fighters until the regime falls. There must be a collective mechanism in order to come up with a true Supreme Military Council operating within an institutional hierarchy.

Q: Will you remain in your post following the Supreme Military Council’s reconstruction?

I did not defect from the regime to become the chief of the Free Syrian Army (FSA). Rather, I am a soldier at the service of the Syrian revolution, and I am ready to play any role. Posts are only nominal and are worthless compared to our key objective, which is the toppling of the Bashar Al-Assad regime.

Q: The FSA has been in talks with the Islamic Front? What are the results of these talks?

We met the Islamic Front delegation almost a month ago and all unresolved problems between us were resolved. The Front’s leaders also welcomed the project of uniting military forces on the ground to confront the regime, but meetings were disrupted due to the joint fighting against ISIS.

Q: What is your assessment of the course of the battles between the opposition fighters and the ISIS?

ISIS is part of Al-Qaeda, and defeating it in Syria is not something easy that can be done within a week or two. Fighting ISIS may take a long time, and thus will deplete and weaken the opposition on some fronts. This is a highly risky issue, because the regular army will take advantage of this weakness in order to make gains on the ground at the expense of the opposition factions. And this is exactly what is currently happening on the Aleppine front in northern Syria. We knew that from the outset, but the war against ISIS was forced on us due to its practices and violations against our fighters.

Q: What role is the Supreme Military Council playing in the battles against ISIS?

We provide some of the battalions operating on the ground with weapons and ammunition available through our operation command. It is natural for support to be concentrated on the battalions that used to operate under the umbrella of the Supreme Military Council but have recently assumed new names, such as the Syrian Revolutionaries’ Front and Jaysh Al-Mujahideen.

Q: Do you have any information about the security cooperation between the Syrian government and Western intelligence agencies that Syrian Deputy Foreign Minister Faisal Al-Mekdad spoke about?

The Syrian regime is used to promoting lies in order to lift the morale of its remaining support base. It is well known that the countries of the Friends of Syria have severed their relations with the regime. However, intelligence agencies usually work secretly. We do not have any information about whether there is cooperation or not. But we call on all international sides to sever ties, if any, with Assad in order to pressure him into giving in to the demands of the Syrian people.

Q: Has your position on attending the forthcoming Geneva II peace talks changed?

Our attendance of Geneva II conference requires favorable circumstances, namely opening humanitarian corridors to allow aid into the besieged areas and the cessation of the barrel-bomb shelling by the regime. In addition, it is necessary that we obtain international guarantees for Assad to step down and surrender his powers to a transitional executive body. In this context, the political opposition must be alerted to the fact that going to Geneva against the will of the fighters on the ground will be a wrong choice and does not serve the interests of the Syrian revolution.