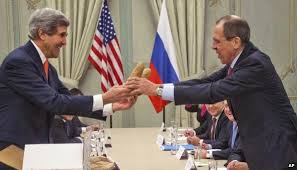 After months of tension between the United States and Russia over issues ranging from Edward Snowden’s intelligence leaks to the Syrian conflict, US Secretary of State John Kerry (pix) sought to bridge the diplomatic gap Monday by giving his Russian counterpart an unusual gift of potatoes.

Kerry, who was in Paris with Russian Foreign Minister Sergei Lavrov to hammer out details of a peace conference on Syria scheduled for Jan 22, surprised his counterpart by opening up a box and presenting him with two large Idaho Russet potatoes.

Kerry joked to journalists about his gift to Lavrov: “Well, he told me he’s not going to make vodka. He’s going to eat them.”

Lavrov replied: “In Poland, they make vodka from potatoes. I know this. But that’s in Poland.

“We used to do this in the Soviet Union. Now we try to do it from wheat.”

Kerry then revisited the matter, saying he wanted to “clarify”.

“We were having a good conversation in the course of the Christmas break over the subject of Idaho, which was where I was at the time, and he recalled the Idaho potatoes as being something that he knew of, so I thought I would surprise him and bring him some good Idaho potatoes.”

But Lavrov, speaking in English, suggested the potatoes may have symbolic use as the Syria negotiations approach.

“The specific potato which John handed to me has the shape which makes it possible to insert potato in the carrot-and-stick expression. So it could be used differently,” he said.