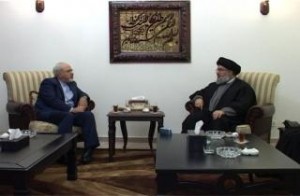 The Iranian Foreign Minister who arrived Sunday said upon arrival at Rafik Hariri International Airport in Beirut that Lebanon is a country of resistance and a role model for the people in the region.

“We stress that the only solution to the Syrian crisis is a political solution and the best way to curb terrorism and takfirism is allowing Syrian people to freely express their opinions through ballot boxes.”

Addressing the fact that Iran has not been invited to the peace talks that will take place in Geneva starting Jan 22 he said .

“We’re not seeking to receive an invitation to the Geneva 2 conference but we would welcome such an invitation” .

Addressing the tension between Iran and Saudi Arabia, which recently pledged 3 billion US dollars to help arm the Lebanese army he said :

He made the statement despite the fact that Iran and its allies Hezbollah and Syria have been recently focusing all their attacks against Saudi Arabia.

Nasrallah even accused Saudi Arabia last December of being behind the bombing of the Iranian embassy in Beirut last November.

Zarif on Monday voiced Iran’s support for forming a unity cabinet in Lebanon, hoping for the activation of the economic agreements between the two countries, “especially after the lifting of the international sanctions” that were imposed on Tehran.

Zarif’s remarks were voiced at the end of an official visit to Lebanon during which he met with President Michel Suleiman, Speaker Nabih Berri, Prime Minister-designate Tammam Salam, caretaker Foreign Minister Adnan Mansour and Nasrallah.

“My visit coincided with political initiatives that opened the door for rapprochement between the Lebanese parties, which might lead to the formation of a new cabinet that would consolidate security and stability,” Zarif said after talks with Mansour at the Bustros Palace in Ashrafiyeh.

“We support any dialogue between the Lebanese parties and we back their efforts to form a new cabinet,” the top Iranian diplomat said in response to a question.

The Iranian FM also hoped “all the bilateral agreements that were signed in the past will be implemented, especially in light of the new global circumstances that have removed the many obstacles that were preventing their realization.”

Asked about Tehran’s relation with Saudi Arabia, Zarif replied: “There is a principle in Iranian policy, which is establishing the best relations of cooperation with the region’s countries. Saudi Arabia is one of the most important countries and Iran is seeking to have the best ties with it.”

The Iranian official noted that Riyadh “can play a critical role in restoring calm in the region.”

Turning to the Syrian crisis, Zarif stressed the importance of dialogue among the rival Syrian parties at the upcoming Geneva 2 peace conference.

For his part, FM Mansour , a close ally of Hezbollah and Syria said:
“We voiced our desire to activate the signed protocols between the two countries so that the economic ties can become at the level of the political relations between our two countries.”

Earlier on Monday, President Suleiman issued a statement following his meeting with Zarif at the Baabda Palace in which he “stressed the importance of Iranian dialogue with Arab countries and of having good ties with them to preserve stability in the Middle East.”

The president also hoped that the Geneva II peace conference would come up with a roadmap to resolve the Syrian crisis and allow the people to decide on the fate of their country.

The Baabda statement also said that the Iranian FM ‘s visit is part of a regional tour that will also take him to Damascus, Amman and Baghdad.

Zarif also inspected the site of the Iranian embassy bombing in the Bir Hassan district of Beirut’s southern suburbs.

Zarif expressed confidence in the Lebanese agencies and the judiciary to resolve the case of the embassy attack according to Voice of Lebanon radio (100.5).

Lebanese Forces leader Samir Geagea warned that such a cabinet is a non government that will only drag the country in opposite directions.

“National partnership to March 8 is only a fake ornament used when needed to cheat the people and it is not an actual concept to which they are committed.”

Similarly, the Phalange Party announced earlier on Monday its refusal to participate in a cabinet that would provide political cover for Hezbollah’s arms and its military campaign in Syria in support of Bashar al-Assad ‘s regime.

“If the cabinet will cover up for the fighting in Syria and if it protects illegal arms ( in reference to Hezbollah ) then it is impossible for us to take part in it,” Phalange party bloc MP Sami Gemayel stressed on Monday following the party’s weekly meeting.

March 14 leaders vowed in the past not to join any government with Hezbollah as long as the party’s fighters were engaged in battles alongside the forces loyal to Bashar al-Assad regime against the rebels who are trying to topple the 40 year old dictatorship.

Syria is the primary goal

Zarif’s visit to Lebanon, Iraq and Jordan will complete the tour that started in Turkey on Jan. 4 of the states surrounding Syria aimed at understanding their views and commitments to closing their borders to bar militants from entering Syria and smuggling arms, since It is almost certain that Iran will not take part in the forthcoming Geneva II talks on Syria, according to AL Monitor

“Iran has a message to convey to these countries: There’s no chance that Assad will fall militarily, and it’s important to cooperate to pave the way for a political solution now to rid thousands of people of the tragedy they are going through because of the continuing war,” Al-Monitor’s source was quoted as saying .