Turkey clamps down on internet 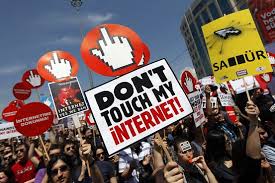 Turkey is seeking to increase control over internet access at a time when the government is also tightening its grip on the country’s legal institutions in response to a corruption scandal.

A legislative proposal put forward by the ruling AK party would give the transport and communication minister the power to block websites deemed to infringe privacy, as well as compelling internet service providers to retain information of their customers movements on the net.

The measure, attached to an omnibus bill, increasing its chances of passage, would also require ISPs to restrict access to proxy sites, which can allow users to circumvent censorship.

Turkey already has internet filters intended to protect children and made 1,673 requests for Google to remove material from the web in the first six months of last year – more than three times any other country – although most of its requests were turned down.

But some critics have alleged that the legislative initiative is part of a general trend in which the government of Recep Tayyip Erdogan, prime minister, is concentrating more power in the wake of a corruption investigation that has targeted a host of figures connected to the government, including four former ministers and Mr Erdogan’s own son, Bilal.

“These are politically motivated measures to curb the free flow of information on the internet even further in Turkey,” said Yaman Akdeniz, a law professor at Istanbul’s Bilgi University. “Looking at the current political climate, it is primarily for controlling the leaking of videos and WikiLeaks kind of documents.”

Last week, the government proposed legislation that would increase the justice ministry’s powers over the council that supervises Turkey’s judges and prosecutors – a move that the council’s acting chairman said, on behalf of a majority of its members, was unconstitutional and violates the separation of powers. Violence broke out at a discussion of these measures on Saturday, with a ruling party MP aiming a kick at a senior judge’s head. On Sunday, Mr Erdogan criticised the judge who was attacked in the brawl, calling him not a lawyer but a “militant”.

The government has also removed hundreds of police officers from their posts in the weeks since the corruption inquiry began on December 17. Mr Erdogan has attacked the probe as a “judicial coup” and a “modern coup, staged by friends” – a reference to the movement of Fethullah Gulen, a preacher and former ally who has broken with the AKP and has many followers in the police, prosecution service and judiciary.

While AKP officials says Gulenists in Turkey’s legal institutions are using the investigation as part of a feud against Mr Erdogan, the massive shifts of personnel in the police and among the prosecutors handling the case have made it harder for it to progress or for new lines of inquiry to be opened.

With hostilities intensifying between the AKP and the Gulenists, expectations had been growing that further revelations of alleged corrupt behaviour could be leaked on the internet. In recent years, a number of recordings involving high profile figures in Turkish public life have mysteriously appeared on the web.

However, the new legislative proposal on the internet could allow the government to shut down access to such videos.

Ankara’s push for greater powers has also raised concerns in Washington and Brussels. “The US supports the desire of the Turkish people for a legal system . . . where no one is above the law and where allegations against public figures are investigated impartially,” said Jen Psaki, state department spokeswoman, last week in the Obama administration’s latest expression of exasperation with Mr Erdogan. “We’ve expressed our concerns about some of the events that are happening directly, publicly and privately, and we’ll continue to do that.”