Referendum just first step on a long road for Egypt 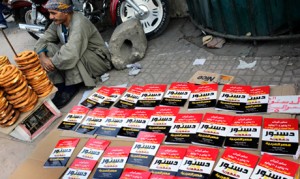 Cairo, Egypt- A successful completion of the constitution referendum is only the first step on a long road for Egypt – political, economic, security and foreign policy challenges remain.

Security will be heightened over the coming days ahead of the constitution referendum on 14-15 January.

The army and police have three objectives: protect polling stations and voters from possible violence by Islamist militants, secure civil servants and judges supervising the vote, prevent anti-constitution demonstrations by the Muslim Brotherhood and its allies.

Interior Minister Mohamed Ibrahim has repeatedly vowed to block alleged plans by the Brotherhood to derail the referendum.

A Yes vote – which Amr Moussa, head of the constitution-drafting panel, has predicted will be around 75 percent – would mark a significant milestone in the transition roadmap announced when president Mohamed Morsi was removed on 3 July. A significant number of challenges will remain, however.

A prime challenge for the authorities is to decide whether to follow the referendum with parliamentary then presidential elections, or to reverse the order or even to conduct them simultaneously.

According to informed sources who spoke to Al-Ahram Weekly, the trend is leaning heavily towards holding presidential elections first in order to provide a stable leader to deal with Egypt’s daunting security and economic challenges.

Interim President Adly Mansour and Abdel-Fattah El-Sisi, army chief and possible presidential contender, have long favoured sticking to the roadmap in order to avoid allegations of manipulating the plan for their own benefit, one informed source says.

“For his part, El-Sisi will prefer to see the composition of parliament before deciding whether to run for president because a largely supportive parliament would facilitate the daunting presidential task,” the source adds.

An El-Sisi candidacy would be controversial in itself because he led the removal of Morsi. It would also further enrage many Islamists and possibly provoke jealousy from other senior military men.

The army chief would likely win comfortably if he decides to stand, according to most independent analysts.

The election of El-Sisi as president would not immediately lead to increased stability unless it is coupled with a supportive parliament and cabinet, according to an analyst.

A lack of coordination between cabinet and presidency could mean a lack of serious political or socio-economic achievements and increased public anger – not to mention reignite the Islamist opposition, the analyst says.

Hanaa Ebeid, a political psychologist, is concerned that if one camp gains full control it will clampdown on any opposition. “I am worried in general about a state of mind where the majority is so satisfied with being in power that it shows aversion to the opposition; this is precisely what the Muslim Brotherhood did when they were in power and this is precisely what I fear the next ruling group will do.”

According to Ebeid, this syndrome of deliberate exclusion prompts a subsequent syndrome: the destructive pursuit of revenge.

Even if the roadmap is successfully completed, there will still be a number of daunting tasks ahead for the new government – especially the economy.

Introducing unpopular reforms, attracting investment and tackling the acute budget deficit are obvious tasks for the next regime.

Economist Riham El-Dessouki suspects the restructuring of subsidies – the most unpopular economic decision to be expected – is unlikely to be introduced this year, given that presidential and parliamentary elections are unlikely to be concluded before July.

Reforms to energy subsidies, which consume around 70 percent of the subsidy budget, have been lined up since 2007 but have never been introduction for fear of provoking public anger – it is hard to see how these factors can be overlooked, El-Dessouki says.

The new government is unlikely to remove subsidies, especially on gas cylinders and gas oil which eat up the largest proportion of energy subsidies and which cater for society’s poorest. It is also unlikely that rises in fuel prices for energy-intensive industries will be introduced, in order to avoid upsetting the business community and because fuel prices for these industries have already been made.

Fixing inflation and the budget deficit will remain a challenge, despite generous Gulf financial aid, before a hoped for increase in economic growth in two to three years, say government sources.

Economic growth is a serious possibility once stability is secured and sufficient legal assurances are granted, argues El-Dessouki.

“What counts most for me is to have things pick up, to have tourists come back and to have a better income so I can pay off my debts and provide for my family,” says Ali, a taxi driver in his mid-fifties. “If the economy does not pick up then nothing matters at all,” he adds.

While government officials agree the economy is the most pressing challenge, they agree without hesitation that foreign policy is a similar challenge.

“It goes way beyond bypassing apprehension over the chances of democracy or the attempt to stir unrest through financing angry opposition groups or even terror groups,” suggests a senior Egyptian diplomat.

Egypt has three pressing foreign policy issues that must be attended to without delay, he says.

First, is to find a settlement with Ethiopia over the Renaissance Dam, which could cause considerable water shortages in Egypt. Egypt had counted on international pressure on Addis Ababa but in view of Egypt’s declining international standing and its internal problems, this pressure has been reduced to a minimum, he adds.

Egypt also has to restore its much weakened status in the Middle East, he adds. Again, this is difficult due to its domestic difficulties and “of course the sharp economic decline that makes us dependent on economic aid and consequently limits our scope for taking the initiative.”

“Take Syria, for example. Our hands are tied in terms of proposing initiatives there because we need to fully synchronise our positions with the Saudis who have been very supportive of us since 30 June,” he says.

A third task is to break away from a quasi-international isolation that Egypt has been facing. “The [foreign] minister has been touring the world but one cannot miss the very limited volume of foreign visits to Cairo since the ouster of Morsi,” he says.

“We hope once an elected president is in office things will change but it would be wrong to underestimate the reaction to an El-Sisi presidency – but we already hard at work explaining to the world that it is the true wish of the majority of the people that El-Sisi runs for president.”

Photo: An Egyptian pretzel vender sits next to copies of the new constitution sold on a street in Cairo, Egypt (Photo: AP)