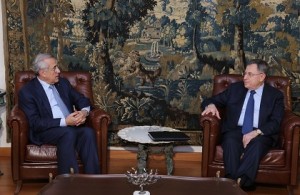 Former Lebanese PM and Future Movement parliamentary bloc leader MP Fouad Siniora met on Saturday at the Baabda palace with President Michel Suleiman, a day after a report indicated that March 14 had a agreed to participate in a an 8-8-8 cabinet .

Siniora did not issue any statements following his one hour meeting with Suleiman , but his press office said later that his meeting with the president was “serious” and “honest.”

A statement issued by Baabda Palace did not confirm the the reports about M14 acceptance of the 8-8-8 formula . Instead the it said the president called on all parties to make mutual concessions to form a cabinet that wins the vote of confidence of the parliament and the trust of the Lebanese.

The meeting at the Baabda palace was followed by meetings with other March 14 officials including M14 officials MP Ziad Kadiri , MP Khaled Zahraman and MP.Michel Faraoun

Despite yesterday’s optimism over the prospects of forming an all-embracing government, several hurdles still needed to be tackled. Here are some of the hurdles

1- Policy statement, while March 8 officials say this should be left for discussion until after the formation of the cabinet, March 14 officials stress that the policy statement should be based on the Baabda Declaration and not the army-people-resistance formula as with the last 2 previous governments.

The June 2012 Declaration which was agreed by all rival officials called for distancing Lebanon from regional conflicts, particularly the war in Syria.

The March 14 camp accuses Hezbollah of violating the Declaration by sending its members to flight alongside Syrian President Bashar Assad’s troops against the rebels seeking to topple him.

3- Rejection of Lebanese Forces chief Samir Geagea to participate in a cabinet in which Hezbollah is represented.

Former Lebanese PM and Future movement leader Saad Hariri has reportedly held a one-hour telephone conversation with Geagea on Friday on the issue but according to Saturday reports Geagea was not convinced and remains opposed to participate in a cabinet in which Hezbollah is represented. Geagea also said that Hariri has not yet taken a final decision on the issue.

Hariri has not taken a final decision yet, or convinced the LF to join the proposed cabinet , and debates on the formation of the cabinet are ongoing,” he told Al-Jadeed television on Saturday.

Lebanese Forces MP Antoine Zahra said in an interview with LBC that “ March 14’s acceptance to discuss the [8-8-8] proposal has been interpreted as acceptance of [the formula].”

Many in March 8 camp are reportedly hoping that there will be a split between Future and the LF , but the Lebanese Forces issued a statement last night saying “those who think that LF and Future will split are dreaming.”

3- Despite the fact that the rival parties have reportedly agreed on the rotation of portfolios in the government in which the March 8 and 14 alliances and centrists would get eight ministers each, several hurdles expected in allocating the portfolios.

Several top level meetings and mediation efforts are expected to take place to handle all the expected hurdles.

Siniora is reportedly expected to meet soon with Speaker Nabih Berri, who is a staunch supporter of the 8-8-8 all-embracing cabinet .

President Suleiman is reportedly adamant about having a cabinet soon and warned that he would form along with Premier-designate Tammam Salam a non partisan government by the end of the month if the rivals failed to strike a deal on the 8-8-8 formula.