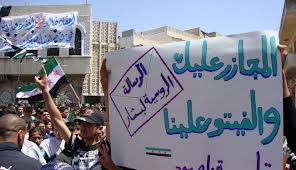 Russia has blocked a UN Security Council statement condemning the Syrian government’s use of air strikes against civilians in the city of Aleppo.

A UN diplomat said Russia put forward amendments to the UK-sponsored statement that removed reference to what had happened in Aleppo.

Russia, joined by China, has also vetoed three Security Council resolutions that would have condemned the Syrian government and threatened it with sanctions.

The latest statement would have had the council express outrage at daily air strikes by the Syrian government in Aleppo.

The embattled city, once Syria’s business hub, is now divided between government and rebel forces.

A UN diplomat quoted by AP news agency said Russia had introduced amendments that watered the statement down so that it had no meaningful impact on the situation in Aleppo.

The UK could no longer support the draft language, the diplomat said.

As consensus is required for adoption among the 15 Security Council members, the draft was effectively blocked.

More than 100,000 people have been killed and millions forced to flee their homes in Syria’s nearly three-year civil war.

Photo: Poster that reads:
a Message to Bashar  from Russia: “you take care of massacres we take care of vetoes”