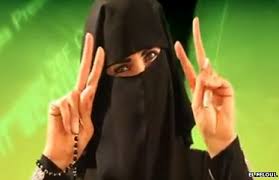 The program will feature on a new TV channel – currently running test broadcasts – and shows El Masry praising the army and making fun of the Brotherhood. She also mocks the Qatari royal family, who she accuses of backing the regime ousted in a military coup last summer.

El Masry told Al-Masry Al-Youm newspaper that it will expose the group’s alleged “terrorist practices” – and adds to a wider government campaign against the movement.

The new channel is named El Feloul which means “remnants” – a phrase more generally to used to refer to supporters of former President Hosni Mubarak – but it says the term is used here in reference to the Brotherhood.

Photo: El Masry wearing a niqab.The niqab – traditionally associated with the Brotherhood – is also mocked in the program