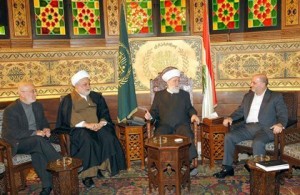 Grand Mufti of the republic Sheikh Mohammad Rashid Qabbani received a Hezbollah delegation headed by Sheikh Abd al-Majeed Ammar in his Dar al-Fatwa office on Monday that condemned the recent assault against the cleric.

“The purpose of this visit was to reassure his eminence the Mufti of our support and to condemn the incident that befell him at the Al-Khashaqji mosque. We also conveyed the greetings of Hezbollah chief Sayyed Hassan Nasrallah,” Ammar said in a press conference after meeting the Sunni cleric.

Ammar assured the reporters that “Hezbollah ties with the Mufti are constantly evolving.”

The ties will remain based on common values “and therefore all attempts to harm this relationship will fail”, Ammar remarked.

Precisely for these special ties Qabbani was trapped on December 29 in the Al-Khasheqji Mosque in Beirut’s Qasqas, when he attempted to enter the mosque to attend the funeral of a teen killed in the December 27’s car bombing that targeted former Finance Minister Mohammad Chatah an outspoken critic of Hezbollah and Syria.

Mourners at the funeral were angered by his arrival and began chanting slogans against him, prompting members of the Internal Security Forces Intelligence Bureau’s Strike Force to escort him out of the Mosque where the funeral was being held.

The Grand Mufti, who has poor ties with the Future Movement, attempted to enter the mosque after Sheikh Ahmad al-Omari gave a fiery speech, saying that “the Sunni sect’s leaderships, security officials, and symbols are targeted by Syria’s Baathi system and Hezbollah.”