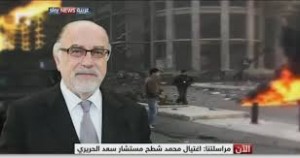 The report comes less than 10 days after a car bombing in central Beirut killed eight people, including anti-Syria former finance minister and member of the March 14 coalition Mohammad Chatah.

NNA said MP Strida Geagea, a Christian member of parliament, March 14 member and wife of Lebanese Forces chief Samir Geagea, had a series of threats sent to her mobile phone.

A statement said Geagea’s colleagues answered the calls, and heard “personal threats against her life, insults and obscenities.”

More such calls came on Sunday, the NNA said.

The threats were reported to the security forces, whom Geagea’s office said should “take the necessary measures” to identify the callers.

A string of other personalities have received similar threats, the statement said.

They include former interior minister Ahmad Fatfat, outspoken TV presenter Nadim Koteich and journalist May Chidiac who survived an attempted assassination for which Syria was blamed.

All are seen as high-profile opponents of Syrian President Bashar al-Assad’s regime and its powerful Lebanese ally, Hezbollah.

The Shiite movement has sent thousands of fighters to Syria to help Assad’s troops in their bid to crush the revolt that erupted nearly three years ago.

Reports have also emerged that Sunni politician Khaled Daher, a fierce critic of the Damascus regime, has also received threats against his life.

Syria and the Iranian backed Hezbollah have systematically denied any links to the attacks.

An international tribunal tasked with investigating Hariri’s assassination is due to start trying five Hezbollah members in absentia on January 16.

However, Damascus still exerts influence over Lebanon through its allies.

Photo: Former finance minister and member of the March 14 coalition Mohammad Chatah , an outspoken critic of Hezbollah and the Syrian regime was assassinated in downtown Beirut on December 27, 2013. Several prominent Lebanese politicians and media figures opposed to Syria’s regime and its ally Hezbollah have been threatened, the state owned National News Agency (NNA) reported on January 5, 2014.