Israel’s Sharon is close to death as his condition worsened 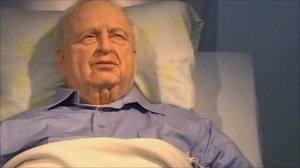 Former Israeli Prime Minister Ariel Sharon, comatose since a 2006 stroke, is close to death as his health continues to decline, the head of the hospital treating him said on Friday.

Reviled by Arabs over his war record and viewed with a mix of respect and suspicion by many Israelis, 85-year-old Sharon has been on life support at Sheba Medical Center near Tel Aviv for eight years.

His condition worsened sharply this week, with doctors reporting a life-threatening collapse of vital organs.

“It looks like the situation is not getting better, and we know what usually happens in such situations,” Zeev Rotstein told reporters on Friday. Asked whether Sharon was in his “final days”, Rotstein said: “I personally feel so.”

Sharon’s two sons were at his bedside, doctors said, and a state funeral was planned.

One of Israel’s most famous generals, Sharon left his mark on the region through military invasion, Jewish settlement building on captured land and a shock, unilateral decision to pull Israeli troops and settlers out of the Gaza Strip in 2005.

“He is comfortable at this time. To the best of our understanding he is not suffering, such that we do not have to take any action to prevent him suffering,” Rotstein said.