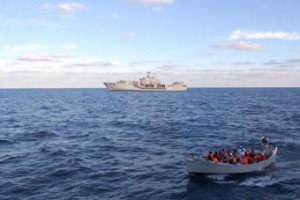 Italian authorities say they have rescued more than 1,000 asylum seekers trying to reach Europe over a 24-hour period.

Navy helicopters spotted four overcrowded boats struggling to stay afloat south of Sicily on Thursday and ships were sent to save them, the navy said in a statement.

There were 823 men, women and children aboard the four vessels, from countries including Egypt, Pakistan, Iraq and Tunisia.

In an earlier operation, the navy rescued 233 asylum seekers from Eritrea, Nigeria, Somalia, Zambia, Mali and Pakistan and took them to a port near Syracuse on Sicily’s eastern coast.

Italy has launched extra patrols, combining ships, helicopters and drones, to monitor the Mediterranean Sea, following a shipwreck in October, in which 366 Eritrean migrants drowned.

Sea arrivals from northern Africa more than tripled in 2013, fuelled by refugees in Syria’s civil war and strife in the Horn of Africa.

Italy is a major gateway into Europe for many asylum seekers seeking a better life and over the past two decades, it bore the brunt of the arrivals, along with Greece and the Mediterranean island of Malta.

It is urging for a coordinated European Union response to the issue.