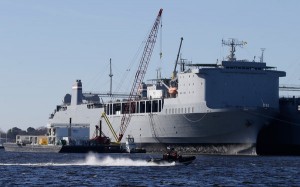 Months after diplomats declared that they had come up with a plan and a timetable to dispose of Syria’s lethal chemical weapons — and with the Nobel Peace Prize awarded to the weapons inspectors — the centerpiece of the mission, a workhorse American military ship that will ferry the weapons to sea for destruction, remains here in port, waiting like a sad bride for her groom.

The ship’s captain, Rick Jordan, does not have his shipping orders, nor does he know exactly which country he is headed to. He has yet to be told on which body of water the unprecedented task of destroying 700 tons of lethal chemicals on his ship, the Cape Ray, will occur.

But the ship — equipped with a complex array of tanks and valves worthy of Dr. Frankenstein — is ready for its historic mission. “A year ago, we were not in a position to do this,” said Frank Kendall, a Defense Department under secretary who spoke to reporters who toured the Cape Ray on Thursday. Now a team of chemists, maritime experts and others have worked with existing technology and are ready to go.

Syria, however, is not. Late last month, the United Nations and the Organization for the Prohibition of Chemical Weapons, the group charged with the removal efforts, said in a joint statement that security conditions in Syria had “constrained planned movements” and that bad weather had foiled plans to move the weapons out by the target date of Dec. 31. Among the biggest problems is the highway that joins Damascus to the coast, which has been recently retaken by the government but where rebel forces continue to be a threat to vehicles and the fear of ambush remains intense.

But getting the weapons out of the country is “a Syrian responsibility,” Mr. Kendall said.

Assuming that happens, the plan is for numerous countries to transport the chemicals — including tons of sulfur mustard and materials used to make sarin gas — from a dozen storage sites across Syria to a port town, most likely Latakia.

In the Syrian port, the materials are to be fetched by Danish and Norwegian ships, with support from Finland and security provided by Russia and China. “So a lot of people are pitching in,” Marie Harf, a State Department spokeswoman, told reporters in Washington on Thursday. The Cape Ray is to be positioned in the port, take the weapons on board and then head out to sea.

Once there, the crew members are to begin the daunting task of neutralizing the weapons with a system that heats the chemicals and mixes them with water or sodium hydroxide to degrade them. The system, located midship, looks like a bit of a science lab encased in a giant igloo. Workers on the ship on Thursday continued to fine-tune it.

The entire process, which officials said they hoped would begin within the next two weeks, would take roughly 90 days to complete, allowing for weather and other factors. Various countries are capable of storing the degraded chemical weapons, many of which will be considered hazardous waste. It is not yet clear what countries might take them.

While the technology has been tested, conducting the process at sea is a new venture that after considerable review “quickly became the best option,” Mr. Kendall said. Other nations resisted the task because of inherent political and perceived safety risks. “Safety is our first order of business,” Mr. Kendall said.

The 648-foot Cape Ray, built in 1977, is no beauty, and is generally used to transport vehicles to war zones from the United States. Cavernous and gray, it will be staffed by 35 crew members, 63 additional workers for the operation and also a security team. “Far and away, weather is our single biggest obstacle on this trip,” Captain Jordan said.

It remains unclear where the process would take place. The Mediterranean would offer the calmest seas, while the Atlantic could be choppier and more difficult to manage, Captain Jordan said, although it can be done anywhere he is told to go.

Under an agreement made between Russia and the United States, the Syrian government under President Bashar al-Assad has until mid-2014 to destroy its chemical weapons program, after the sarin gas attack last August that Western officials attributed to Mr. Assad’s forces.