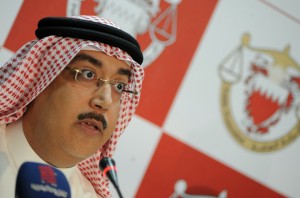 Bahrain has accused Iran’s Revolutionary Guards of providing opposition fighters with explosives training in order to carry out attacks in the Gulf kingdom, also announcing that it had arrested five suspects.

“He is also accused of jeopardizing the safety and security of the kingdom, injuring persons, terrorizing citizens and residents, disturbing public peace, spreading chaos, and preventing government institutions and authorities from performing their functions,” the statement said.

In statements quoted by state news agency BNA, he added that five people had been arrested and “admitted joining a group to carry out terrorist attacks… and travelled to Iran to receive training in Revolutionary Guards camps and then received sums of money.”

An arrest warrant has been issued for Moussawi and a group of people associated with him.

The chief prosecutor said two men had been arrested while they were “on a boat receiving weapons, munitions and explosives to be smuggled from a boat at sea into the country. Three other accused group members were also arrested.”

On Monday, Bahraini authorities said they had seized a boat smuggling explosives made in Iran and Syria into the country.

Bahrain is ruled by a Sunni Muslim dynasty but has a population that is majority Shiite.

The government crushed a mostly Shiite-led uprising in 2011 and has long accused predominantly Shiite Iran of meddling in its affairs.

Since the 2011 uprising, which called for democratic reforms, demonstrations have regularly been held in Shiite villages around the capital, often sparking clashes with security forces.

At least 89 people have been killed in Bahrain since the protests began, according to the International Federation for Human Rights.

Several bomb attacks have taken place in recent months, including one that targeted a Sunni mosque close to the royal court in July but caused no casualties.

The head of the main Shiite bloc Al-Wefaq was released after a day of questioning, but was charged with incitement to religious hatred and spreading false news endangering national security.

Photo: Osama Al-Oufi, spokesman for the Bahraini Public Prosecution addresses a press conference at the Public Prosecution headquarters in the Bahraini capital Manama 13 November 2011. Bahraini authorities said that an alleged terrorist cell made-up of five Shiite Bahrainis that had been uncovered recently had received military training and financial support from Iran Revolutionary Guard and Basij forces after being setup by two Bahraini opposition figures living abroad. According to the authorities the alleged cell was planning to target the Saudi embassy compound in Manama, the King Fahad Causeway linking Bahrain and Saudi Arabia, the Ministry of Interior headquarters, and individuals which they did not name. EPA/MAZEN MAHDI