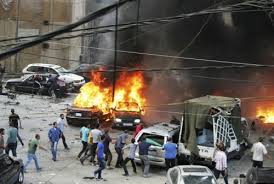 Lebanon’s army intelligence believes a young man from the north of the country may have detonated himself in a deadly southern Beirut attack, an official in the area said Friday.

“The father of young Qatiba al-Satem has been called in by the army intelligence branch in the area, because his 20-year-old son is believed to have detonated himself yesterday in southern Beirut,” Noureddine al-Ahmad, mayor of the Sunni Muslim area of Wadi Khaled in northern Lebanon, told AFP.

The statement comes a day after four people died and 77 wounded in a car bomb blast in the southern Beirut stronghold of the Shiite Muslim movement Hezbollah.

There has been no official confirmation yet that the blast was caused by a suicide attacker, but the authorities are investigating that possibility.

Mayor Ahmad said the suspicions over Satem’s alleged role were based on the finding of a family document at the scene of the blast, in the busy Al-Areed street in southern Beirut.

Satem’s father was currently undergoing DNA tests, the results of which would be compared to the DNA found in the remains of a body found at the scene of the attack, said Ahmad.

An AFP photographer said dozens of Wadi Khaled residents gathered at Satem’s family home after the news broke, and expressed their disbelief over the reports.

“My polite, reasonable son would not do that! That’s impossible!” his mother cried.

Satem’s family and other Wadi Khaled tribes published a statement saying: “The culture of Wadi Khaled is not blood-thirsty. It is a culture of moderation, forgiveness and peaceful co-existence.”

The families also said Satem “does not belong to any political or religious party, and he was preparing to travel to France in order to continue his studies.”

They called on the security services to conduct a “fair and transparent” investigation.

Speaking to reporters in southern Beirut, Interior Minister Marwan Charbel said Satem’s father had informed the security services that his son had gone missing on December 30.

The statement came a day after four people were killed and 77 wounded in the southern Beirut car bomb attack.

The remains of a fifth person, possibly a suicide attacker, were also found.

Update: Al-Manar reported that the DNA tests have confirmed that the suicide bomber who drove the car in Haret Hreik is Qatiba al-Satem